What Is Your Next Wild Adventure of 2018 Based on Your Zodiac Sign? 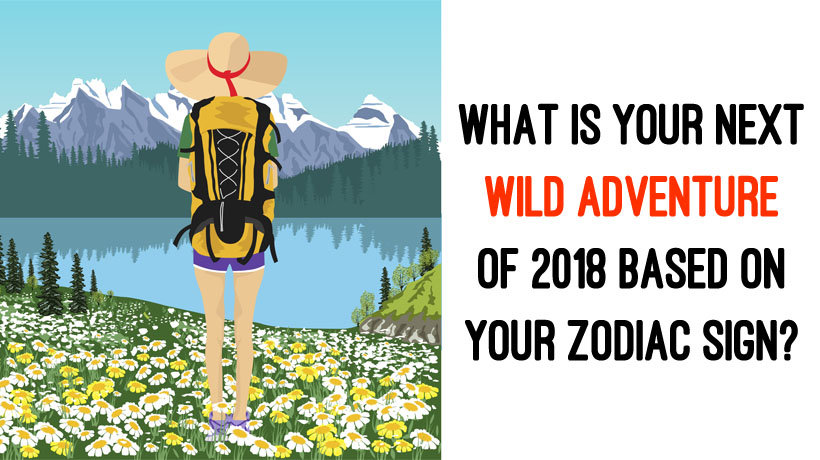 Ah, 2018. Another new year of possibilities, opportunities and fun! Amidst setting new goals and resolutions for the year, avoid taking yourself too seriously, and start thinking about these exciting escapades that may be perfect for you.

Aquarius (January 20th-February 18th)
Your independent nature at times can unintentionally make you seem disconnected from others. This year, try branching out of your social circles and attend some Meetups that fall way outside of your usual go-tos. You’ll never know who you’ll hit it off with – and you might even find a new hobby/interest as well.

Pisces (February 19th-March 20th)
Since your head is usually stuck in the clouds anyway, why not rise to the challenge? Try parasailing or, if you’re feeling bold, skydiving for an unforgettable experience. But proceed with caution!

Aries (March 21st-April 19th)
Your adventurous self is likely already churning a number of ideas in your brain about what exhilarating things you can plan for 2018. Find some time in your schedule to carve out a spontaneous trip with your partner-in-crime. Spin the globe and just watch where your finger lands.

Taurus (April 20th-May 20th)
Stepping outside your routine or set plans can feel a little uneasy for you, but you’ll be glad you did. Invite the guy you’ve been interested in over for a night of Truth or Dare. Yes, it may seem a bit juvenile but you’ll actually end up getting to know more about him than you thought (and having some fun in the process!) You never know where your night may lead.

Gemini (May 21st-June 20th)
Your wild thirst for soaking up knowledge and meeting new people can lend itself to explore many different types of adventures. Participate in a scavenger hunt in a new city for a weekend full of challenge and discovery.

Cancer (June 21st-July 22nd)
This year, tap into your sentimental side without stepping too far outside your comfort zone by taking an early morning hike up a mountain. The sunrise and view from the top will be more than worth the struggle.

Leo (July 23rd-August 22nd)
As king/queen of the jungle, you’ll enjoy going on a group camping trip this year – complete with s’mores, songs by the bonfire and food-scouring. It may take some time to get used to doing everyday things without the modern-day luxuries that you so love but you’ll have the time of your life.

Virgo (August 23rd-September 22nd)
Take a break from analysis paralysis and focus your energy on something more physical such as rock climbing. You’re super health-conscious, so you’ll enjoy exercising your mind and your body in an exciting new way.

Libra (September 23rd-October 22nd)
You’re a true advocate for justice and you aren’t afraid to show it. Create a boldly unapologetic sign and march for a few causes you fully support. Let your voice be heard!

Scorpio (October 23rd-November 21st)
You’re intense about most things – especially in the bedroom. Stray outside of the usual and plan a sexy night in with your partner this year. Create an adventurous atmosphere that will keep him on his toes.

Sagittarius (November 22nd-December 21st)
As a free spirit, you’re always looking for new ways to escape your daily routine. This year, take up a salsa dancing class and truly move to the beat of your own drum.

Capricorn (December 22nd-January 19th)
Let 2018 be the year you take some bold risks, Capricorn. You’re used to planning trips meticulously when you travel. This time, let the chips fall where they may and fully immerse yourself into a new country without a set itinerary.