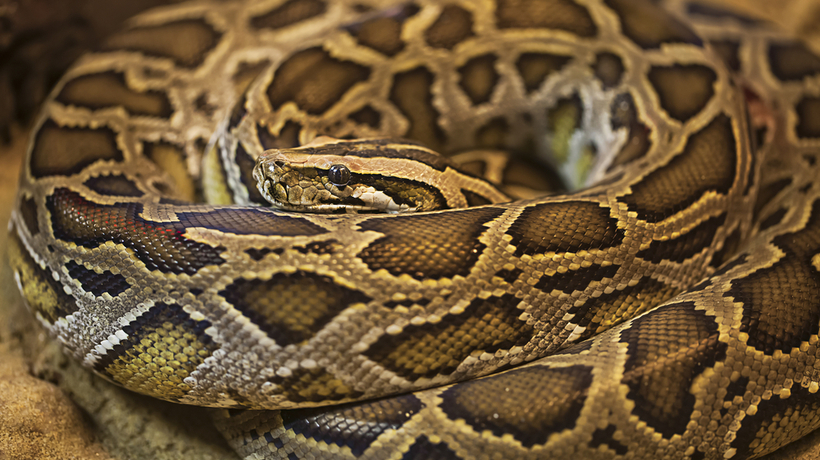 Officers in Maryland were faced with a shocking scene on Wednesday after receiving a call from a resident who was concerned about his neighbor.

According to a statement by the Charles County Sheriff’s Office, the man began to worry about his neighbor after he had not seen him in about a day. He approached the door to the neighbor’s home to investigate, where he was able to see that the homeowner had fallen inside.

Upon arriving at the scene, officers found the unnamed 49-year-old man “lying on the floor and unconscious.” Authorities say that there were no obvious signs of foul play.

Inside, they discovered “more than 100 venomous and non-venomous snakes of different varieties,” which were “in tanks situated on racks.”

According to WRC-TV, among them was a 14-foot-long Burmese python as well as venomous snakes that are illegal to own in the state of Maryland.

Animal control officers were called to the home and “tagged and bagged” a total of 125 snakes.

“Our chief animal control officer said in his more than 30 years of experience, he had not encountered this kind of thing before,” county spokeswoman Jennifer Harris told WRC-TV. The outlet reports that the non-venomous snakes will be taken to Virginia, while the venomous snakes will be sent to North Carolina.

Although the discovery may alarm some neighbors, officials said there was nothing to worry about.

Due to alarm from the community, Harris released a statement assuring locals that they are not in any danger despite the unusual situation.

“I do want to assure the community, [and] anybody living in this neighborhood, we have not seen that any of the snakes were not properly secured or could have escaped,” she told WUSA-TV. “I know people were worried that there could be some danger to people living nearby, but at this point, we have not uncovered or determined that any of the snakes actually were not secured after this gentleman’s death.”

As investigation is still underway, and the man’s cause of death will be released by the chief medical examiner in Baltimore.