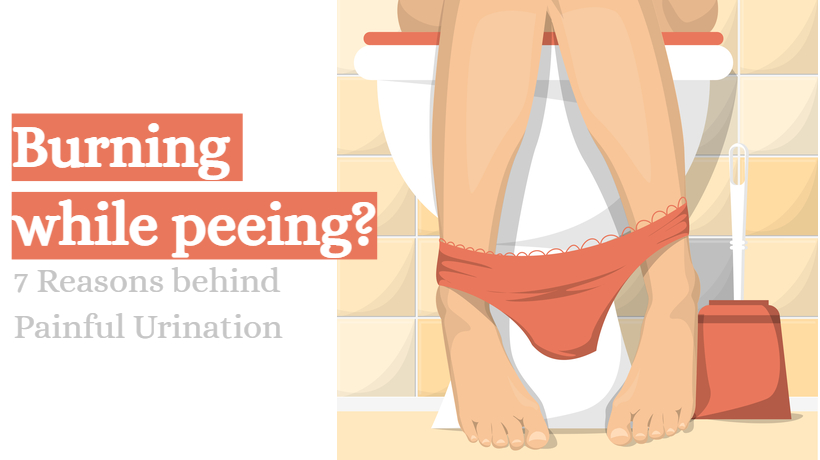 If you notice a burning, stinging sensation when you go to pee, chances are, your body is trying to tell you that you have some sort of infection or irritation in your bladder. This symptom, known as dysuria, or painful urination, is most often caused by a urinary tract infection, although there are other potential health issues that could be behind the discomfort. Especially because dysuria is more prevalent in women than in men, it is important to understand what other symptoms to watch out for so you can receive a proper diagnosis.

Here are some of the most common causes of painful urination:

Urinary Tract Infections, or UTIs, are the leading cause of painful urination and can occur in any location of the urinary tract, which includes the bladder, the kidneys, the ureters, or the urethra. More than half of women will develop a UTI at some point in life. UTIs occur when bacteria infect the system that carries urine out of the body, resulting in serious discomfort. Fortunately, most UTIs can be easily treated with antibiotics.

Some factors that can increase your chances of developing a UTI include:

Besides dysuria, other symptoms of a UTI include:

To prevent a Urinary Tract Infection, experts recommend upping your water consumption, trying a different birth control, or emptying your bladder more often, as these habits will prevent bacteria from entering the urinary tract.

Besides UTIs, dysuria could also be the result of a vaginal infection, such as a yeast infection. In these cases, other symptoms you may notice include:

Sexually Transmitted Infections, or STIs, could also be at the root of painful urination. Gential herpes, chlamydia, and gonorrhea all can result in dysuria, in addition to other uncomfortable symptoms such as:

Kidney stones usually develop due to calcium buildup in the bladder, which then forms hardened stones in and around the kidneys. These stones can cause major physical discomfort in the abdomen and back, as well as painful urination. Similarly, ovarian cysts can cause pain due to the pressure placed on the bladder, but in addition to dysuria, these cysts can also cause other symptoms including:

Your pelvic floor is a group of muscles found in the base of your torso, responsible for forming the body’s main support structure. The muscles in the pelvic floor add support to several of the body’s organs, including the bladder, uterus, prostate, vagina and rectum, by wrapping around the pelvic bone.

Pelvic floor disorder, or pelvic floor dysfunction, is the inability to correctly relax and coordinate your pelvic floor muscles to have a bowel movement or urinate. Symptoms of this condition include constipation, painful intercourse, pain in the lower back and pelvic region, and frequent, painful urination.