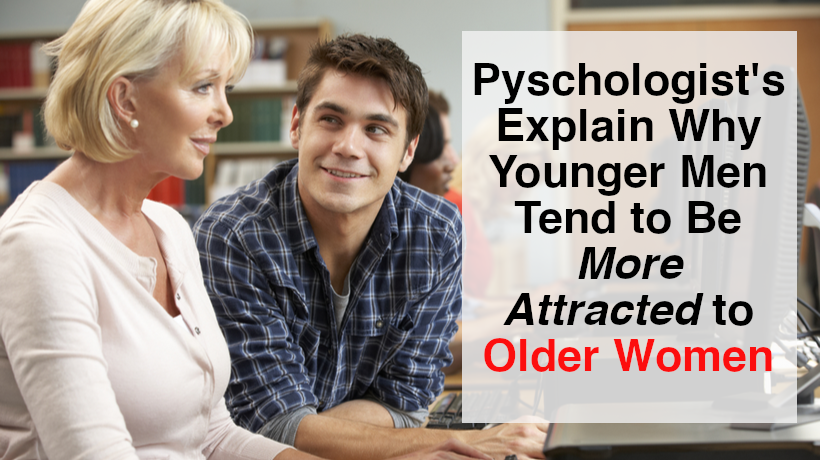 Relationships between younger men and older women have become common. Some men can be looking for different things from a relationship than women of the same age, so these different desires are part of what attracts younger men to older women.

According to Wendy L. Patrick, Ph.D., it appears that some men choose to date older women partially because there is more of a sense of relational equality. These relationships are more common than most people believe, and more successful as well. Here are some reasons why younger men often prefer older women.

Men want a relationship where they can talk and connect on a deeper level. Since older women are more mature, they tend to be able to hold intellectual conversations better, which younger men can find attractive. According to research by biological anthropologist Helen Fisher, Ph.D., 87 percent of men said they would date a woman who was more intellectual than they were, and who was better educated.

Older women have more life experience and tend to know what they want in life. Men are attracted to women who are sure of themselves and of what they want, who have meaningful and fulfilling goals. Women who have set plans in their life can have more time to invest in a relationship, which becomes appealing to a man.

Having life experience gives an older woman knowledge that younger women have yet to learn. Men like this because it can help him mature in their relationship. Men tend to draw towards someone who can give them realistic outlooks on life and help them grow intellectually. Today.com dedicated a piece to interviewing younger men and their love for older women and found that most recognized that “older women have more life experience, emotionally stability, grounding, and can offer both honesty and different perspectives.”

Younger Men Can Be Ready for Emotional Maturity

Older women are more mature in many aspects of their life, including emotionally. They will take their relationship seriously and will share their feelings with their partner, and this is something men like about older women. Older women can help a younger man grow emotionally too, in learning how to process and express their own feelings.

Men Are Looking for Mature Behavior

Mature women will have a better sense of how to handle their emotions and behaviors. Men like women who are less hectic, so the calming and better nature of older women attracts younger men who are ready for a more serious type of relationship. Men tend to draw themselves towards women who can provide mature behavior towards their relationship and in life. It also helps them mature in their own lives as well.

Some younger women tend to need constant attention and reassurance, but most mature women can be confident on their own. Older women are confident in who they are and can tackle anything with grace and maturity. This can be very attractive to men because they know that older women know what they want and there will be no games in their relationship. In the Today.com piece, men conveyed that the attention of an older woman boosted their own level of confidence and self-esteem as well.

Younger men want to be in a relationship that they feel respected and give that respect to their partner as well. They respect older women because they have life experience, are mature and they know that they can gain a lot from being in the relationship. According to Gleb Tsipurky, Ph.D., permitting each other to have privacy, as well as not pushing the other person to do things they’d prefer not to do, helps increase happiness in relationships, since it builds up mutual trust. Knowing that they can trust an older woman will make men respect her instantly.