7 Stages of Gaslighting in a Relationship Not to Ignore 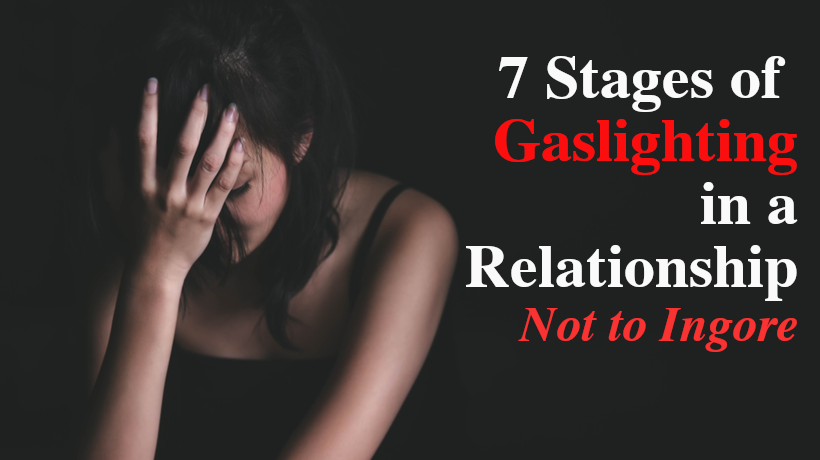 Gaslighting is a form of persistent manipulation and brainwashing that causes the victim to doubt themselves, and ultimately lose their own sense of perception, identity, and self-worth, according to Preston Ni, M.S.B.A. Gaslighting can occur in many types of relationships, including bosses, friends, parents, and between a couple. Here are seven stages through which a gaslighter dominates a victim, so you know what to look out for.

A gaslighter will create a negative narrative about the victim, saying things like, “There’s something wrong with you.” According to Ni, gaslighters tend to concentrate on making their victim feel inferior through false accusations, constant criticism, and psychological intimidation. It will put the gaslightee on the defensive and can start to feel dominated and controlled.

These falsehoods that the gaslighter creates are repeated constantly in order to control the conversation and dominate the relationship. According to Robin Stern, Ph.D., the victim will feel like everything they do is wrong and will always be thinking it’s their fault when things go wrong.

When a gaslighter is called out on their lies, the conversation can escalate by continuing their attacks, refuting the evidence with denial, blame and misdirection. They do this to oppress and dominate their victim. According to Ni, many gaslighters view relationships as inherently competitive rather than collaborative, where they have to come out on top. Therefore, they will get aggressive when their actions and lies are brought to their attention.

Stage 4: Wear Out the Victim

By staying on the offensive and continuing with their lies and manipulations, the gaslighter wears down their victim. The gaslightee becomes discouraged, resigned, pessimistic, fearful, debilitated, and self-doubting. According to Ni, the victim begins to question their own perception, identity, and reality. The victim can become tired of trying to defend themselves and even their family and friends.

To continue with their manipulation, the gaslighter will occasionally treat the victim with false kindness or remorse, which lead the victim to believe that there is a sense of hope and change in the relationship. The temporary kindness will only last so long before the victim’s guard is let down and the gaslighting begins again. According to Ni, with this tactic, the gaslighter also further reinforces a codependent relationship.

The ultimate goal in a gaslighter’s relationship is to be the dominant one and to always be in control. They will take advantage of the relationship that they are trying to control. Preston Ni, M.S.B.A., shares in this book, How to Successfully Handle Gaslighters & Stop Psychological Bullying, that by maintaining and intensifying an incessant stream of lies and coercions, the gaslighter keeps the gaslightee in constant state of insecurity, doubt, and fear.