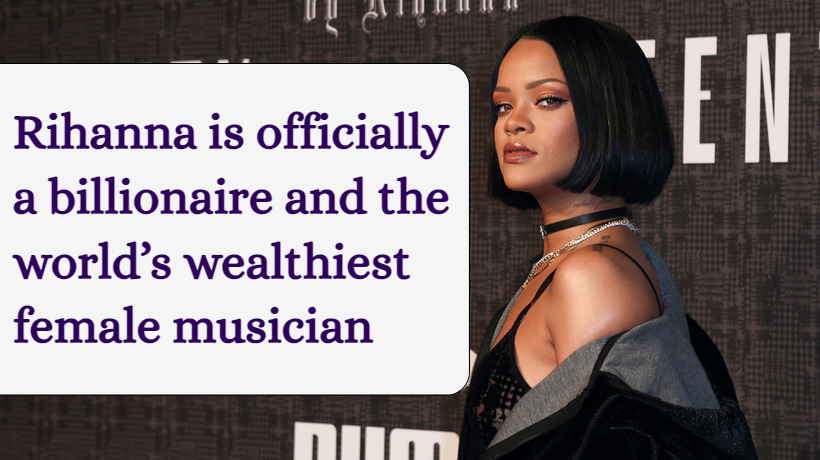 On Wednesday morning, Forbes announced that Robyn Fenty, better known by her stage name Rihanna, is officially a billionaire, worth an estimated $1.7 billion. Her wealth makes her the richest female musician on the planet, and second wealthiest female entertainer (coming right under Oprah Winfrey).

But the majority of the pop star’s wealth doesn’t just come from her music career. Combined with her massive social media following—101 million followers on Instagram and 102.5 million on Twitter—Rihanna has capitalized on her name through her independent beauty and lingerie business ventures.

Since launching Fenty Beauty in 2017, Forbes estimates that the singer has amassed at least $1.4 billion in wealth; she currently owns 50% of the company. In addition to her profits as a music performer, much of the rest of Rihanna’s wealth comes from her lingerie line, Savage x Fenty, which is now worth as estimated $270 million, since it was founded in 2018.

“The majority of her $1.7 billion estimated net worth is not from singing but from cosmetics,” Forbes editor Kerry Dolan told Good Morning America. “From a super-successful cosmetics line which, when it was launched, drew lots of praise because there were something, like, more than 40 shades for all ranges of skin tones, which was something that at the time, not very many cosmetics lines had been that inclusive.”

By the end of 2018, Fenty Beauty was bringing in more than $550 million in annual revenues, according to French company, LVMH — the fashion house behind Louis Vuitton and Dior that helped Rihanna launch the wildly successful makeup line. The cosmetic brand did so well, it beat out other popular celebrity-founded brands like Kylie Jenner’s Kylie Cosmetics, Kim Kardashian West’s KKW Beauty and Jessica Alba’s Honest Co.