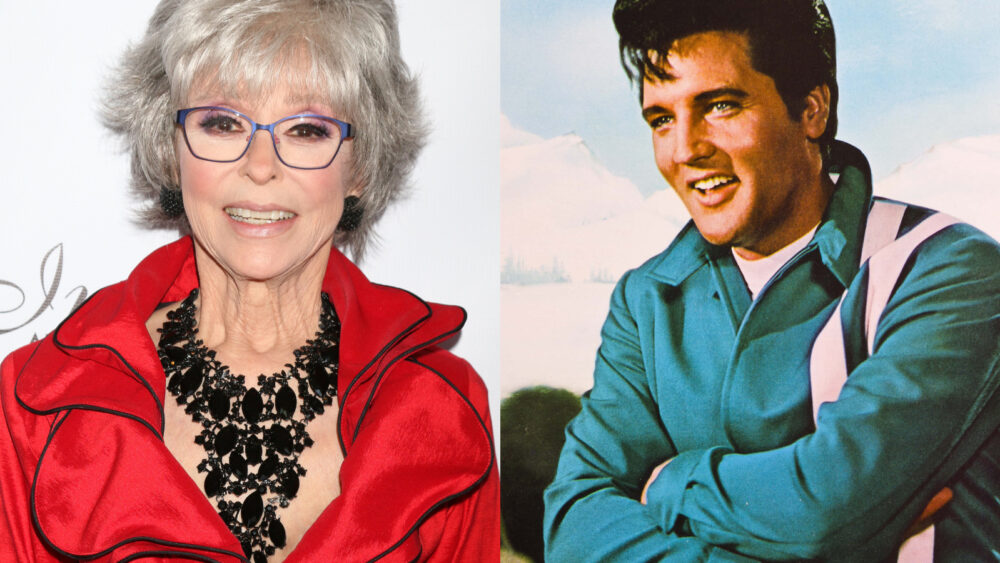 “It was wonderful,” Rita Moreno says of dating Elvis as a form of revenge.

When Moreno found out that Brando had been cheating throughout the entirety of their 8-year relationship, she found a cunning way to get back at him.

On Wednesday, the 89-year-old Oscar winner told The View, “I found lingerie in his house and, of course, I was heartbroken, and I went home in tears — really, I was naïve — and I was angry too, just furious. The next day, the phone rings, and I hear ‘Miss Moreno?’ I said, ‘Uh, yeah?'” she recalled. “‘This is Colonel Parker, my client is Elvis Presley, and Elvis spotted you at the 20th Century Fox commissary, and he liked what he saw.’”

“I said ‘Oh?’ and he said, ‘And he would like very much to meet you. Would you like to meet him?’” Moreno continued, adding, “And I thought of those panties, and I said, ‘Yes, I would!'”

Moreno said that she “dated [Elvis] several times” and that she found the superstar to be “sweet but boring.”

Crossing her arms and pretending to look at her nails, she sassily strove for indifference and added, “He was sweet, but he was a country boy. So anyway, when [Brando] found out, it didn’t take long. He started to throw chairs. He was so angry. It was wonderful. And I just sat there as he threw chairs and carried on.”

Moreno and Brando met when she was 22 on the set of the Napoleon biopic Désirée.

The actress’s life, career, and “tumultuous” relationship with Brando were later detailed in a documentary titled: Rita Moreno: Just a Girl Who Decided to Go for It, which debuted at the 2021 Sundance Film Festival.

In 2013 Moreno wrote a memoir titled Rita Moreno, where she send light on her relationship with her husband and touched on heavy topics such as abortion and suicide.

Then, in 2017 despite being divorced from Marlon for many years, Moreno told PEOPLE Brando was the “lust” of her life and revealed she kept a photo of him in her bedroom.

“Why that picture of Marlon Brando? Because he was a big love of mine in my life,” Moreno said. “This one, it almost seems like a vignette out of a movie, so that’s why it’s there. He was the lust of my life and that over there is the love of my life,” admitted Moreno, gesturing to a framed photo of her with her husband embracing.

Moreno admits that therapy, leaving Hollywood and returning to the New York stage helped her get through that difficult time, but says that marrying Leonard Gordon in 1965 played the biggest role in paving the way to her recovery.

“We balance each other,” she told PEOPLE in 1975. “I am not exactly Mrs. Good Housekeeping, although I love to cook, bake, even iron, but only because it’s not mandatory.”

Even divorce and remarriage couldn’t seem to keep the two exes away, as years after Moreno’s marriage to Leonard, the couple welcomed Brando into Moreno and Leonard’s family as a close friend.

“[My daughter] came home from school one day and found him playing the congas in our living room,” Moreno told PEOPLE. “She called him ‘the man with the drums.'”