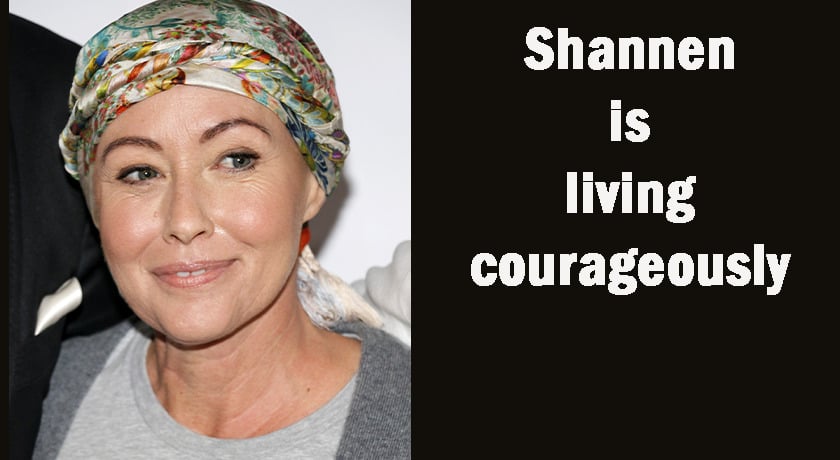 Shannon Doherty has been publicly fighting breast cancer for eight years. The Beverly Hills 90210 star first shared her diagnosis in 2015 and underwent treatment for two years. In 2017, she announced that she was in remission.

Unfortunately, according to NBC News, Doherty’s cancer came back in 2020. This time it was stage 4, which was difficult for her to come to terms with.

“I don’t think that I’ve processed it. It’s a bitter pill to swallow in a lot of ways,” Doherty said in an interview with Good Morning America.

Despite this heartbreaking diagnosis, Doherty has still managed to courageously fight and inspire her fans.

In 2021, she shared intimate photos on Instagram during Breast Cancer Awareness Month. She was open and honest about how she was doing, saying she is “fighting to stay alive,” according to Page Six.

“For breast cancer awareness month, October, I’d like to share more of my own personal journey from my first diagnosis to my second. Is it all pretty? NO but it’s truthful, and my hope in sharing is that we all become more educated, more familiar with what cancer looks like,” Doherty wrote on Instagram.

“I hope I encourage people to get mammograms, to get regular checkups, to cut through the fear and face whatever might be in front of you,” she continued.

More recently, Doherty has been keeping busy despite living with cancer. Per Surivornet, she has been posting highlights on social media of her dancing, horseback riding, gardening, and traveling to various places.

In September 2022, she shared highlights from her trip to Nashville, Tennessee. She posted a video in what appears to be a studio surrounded by musicians and various instruments. She captioned the video, “#thisisgibson. Nashville with the Do Epic S***t crew.”

Doherty is well-known for her roles in Beverly Hills 90210, Heathers, and Charmed. Per US Weekly, she first appeared in the movie Heathers in 1988, then she played the role of Brenda Walsh in Beverly Hills 90210 from 1990 to 1994. 90210 made her a household name, and she continued her rise to fame in her role as Prue Halliwell on the show Charmed.

Doherty was married twice to Ashley Hamilton and Rick Salomon before marrying her now husband Kurt Iswarienko in 2011.

According to Variety, Doherty wants to be an example of someone with cancer who is still working and living life to the fullest. In 2021, she filmed three movies: Dying to Belong, List of a Lifetime, and The Fortress.

“The best example that I can continue to set for other people with cancer, and to the outside world who doesn’t have cancer,” Doherty said, “is to show them what a cancer patient looks like. We are employable.

“So for me, I’m just trying to live the best I can, to be the best example at this moment.”