Body Side Effects of Eating Watermelon, the Good and the Bad 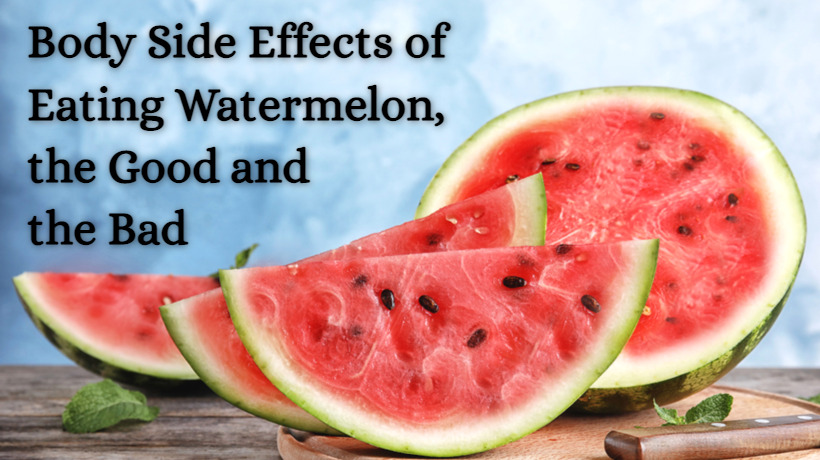 Watermelon is a staple snack to have in the summer. Not only is it refreshing, but it is packed with many nutritional benefits as well. Watermelons are a great source of both vitamins A and C and are high in antioxidants. Despite how sweet they can actually be, watermelons are actually fairly low in sugar in comparison to other sweet fruits.

Aside from these amazing benefits, there are a few side effects you may or may not know about watermelon- both good and bad.

Watermelon has high amounts of fructose, a plant component that belongs to the FODMAPs group. People who have a history of digestive problems, such as Irritable Bowel Syndrome (IBS), may need to reduce their intake of FODMAPs.

Watermelons are high in antioxidants, a key to possibly reducing the risk of many diseases including heart disease and certain cancers. Lycopene, a powerful antioxidant found in watermelon and tomatoes, and helps fight against cancer, repair damaged cells in the body, and even promotes anti-aging.

When looking to manage weight, watermelon may be a great snack to incorporate into your diet. Because of its high water content, it gives both the feeling of being hydrated and satisfied after a meal. This way, you won’t want to eat in big portions to achieve the same results. It offers lower calories for the same delicious, satisfying feeling.

In comparison to other fruits, watermelon has been found to trigger migraines more than any other fruit. In a recent study, 30% of subjects reported a migraine in just 90 minutes of ingesting the fruit. Although the direct cause is not known, it is known that certain foods other than watermelon can be a trigger for migraines.

Because of its increased satiety, watermelon may be the key ingredient to weight management efforts. In a 2019 study, researchers discovered that consuming 2 cups of watermelon per day helped weight control attempts by increasing satiety. In the study, the researchers compared watermelon to an isocaloric cookie group and gave the two groups the same amount of calories. This was done to study the effects of calories, and how full they make us feel.