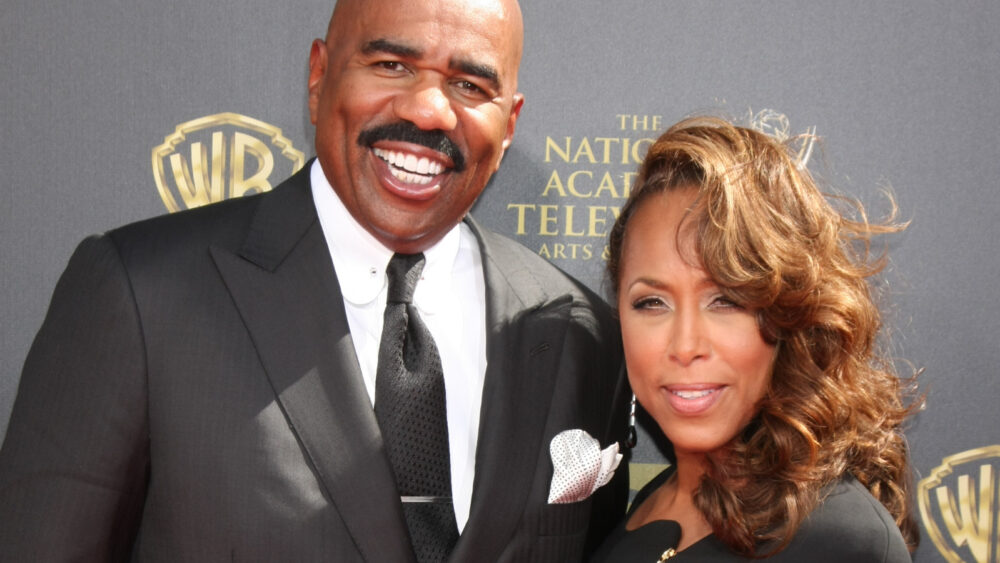 According to Parade, even though Steve Harvey is one of the “most successful stand-up comedians of all time,” his personal life has arguably been a little bumpier.

Harvey, now 64 years old, has been married three times. Here’s everything you need to know about Harvey’s current wife Marjorie Bridges and his past two marriages.

Harvey and Bridges have been married since 2007. Both of them are on their third marriage, but it seems the third time really is the charm. For Harvey, this marriage has been his “most successful” at 15 years and counting.

During a commercial break on Harvey’s talk show in 2018, the couple revealed that they first met at one of Steve Harvey’s comedy shows in Memphis.

“I was late and I thought he was gonna give me the business because he got real quiet. He was just staring at me…I thought I was gonna become part of the show,” Bridges said. “He finally realized he’s gotta say something, he was like, ‘Oh, I’m sorry. I don’t know who this is, but I’m gonna marry her.”

Harvey also admitted that the first time he saw his future wife, he “quit breathing.”

Steve Harvey proposed to Bridges extravagantly—yet tastefully—by flying his future bride out to Cabo, Mexico, for a vacation. Unable to wait a second longer, Harvey surprised her on the first night of their “getaway” by hiding a diamond ring in her dessert.

Harvey’s wife is a woman of many talents and passions. At 56 years old, she’s the founder of The Lady Loves Couture, a fashion and lifestyle brand. She is also the co-founder of The Steve & Marjorie Harvey Foundation, which “provides youth outreach services that help cultivate the next generation of responsible leaders by providing educational enrichment, mentoring, life transformation skills, and global service initiatives.”

Marjorie has also been crowned the metaphorical “Queen of Slay-Cations” thanks to her passions for traveling. Together, she and Steve have “climbed Australia’s Sydney Harbor Bridge, made friends with parrots in the Dominican Republic, cruised the Mediterranean by yacht, vacationed extensively through Italy––and in 2019, embarked on an emotional pilgrimage “home” to Ghana.”

In 2022, on the couple’s 15th anniversary, Harvey published a letter to Bridges on Good Housekeeping. The letter reads as follows: “I owe you a debt of gratitude because you simply changed my life,” he writes. “If people get tired of hearing me say that, that’s OK. It doesn’t change the facts. You are the single biggest reason outside of God’s grace that I am where I am today. You’re the one.”

Before Bridges, Harvey was married to Marcia Harvey (1981-1994) and Mary Shackelford (1996-2005). Marcia has now gone on to be a published author and maintained a relatively low profile. On the other hand, Shackelford and Harvey had a very messy, very publicized divorce.

Steve Harvey is also a father to seven children and a grandfather to five.

We wish this happy couple the best!