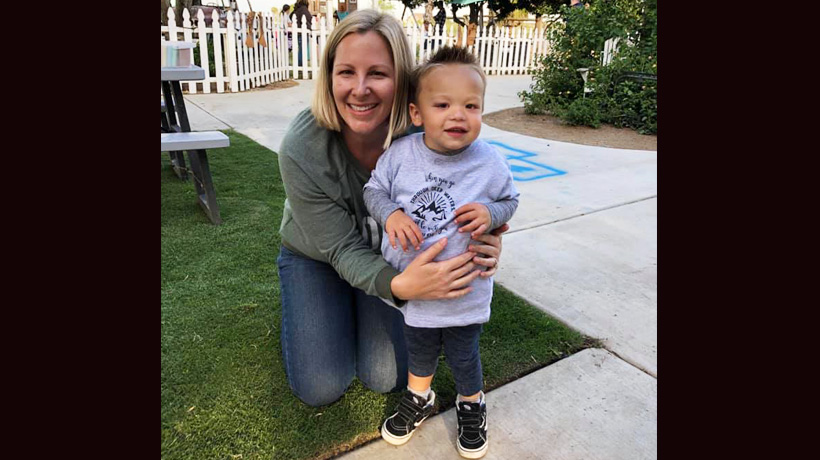 In the midst of the world’s darkness, there are loving, compassionate spirits who awaken our innate potential for human goodness.

Susie Leroy, 35, is one such “awakener.”According to a report from ABC News, Leroy had been following the Facebook page “A Miracle for Kaleb” which shared updates about two-year-old Kaleb Perry’s rare urinary tract disorder. When the Facebook page announced Kaleb was in desperate need of an organ transplant, she decided to donate her own kidney to save his life.

Even though Leroy was a complete stranger to Kaleb, she agreed to be a donor to help him and his family. Leroy is a mother of three children around Kaleb’s age and she says she was felt empathetic toward the Perrys.

Kaleb’s mother, Mandy, was four months pregnant when her child was diagnosed with prune belly syndrome, an uncommon disorder characterized by an expanded bladder and problems with the upper urinary tract.

Doctors observed that he was not able to urinate in utero, which was adversely affecting his kidneys. Despite his challenging diagnosis – and all of the hospital visits, surgeries, and general discomforts that it brings – Mandy says Kaleb is a happy, fun-loving child who radiates joy to all.

In the last couple of months, though, his condition had been growing progressively worse, and he would typically need to be on dialysis. He was in dire need of a new kidney, but none of his family members were a match.

In desperation, Mandy took to Facebook, where she had previously started a group called “A Miracle for Kaleb” to share her son’s story.  Miraculously, Susie reached out soon after with the overwhelming news that she wanted to be a donor.

Her act granted him and his family the second chance they truly needed.