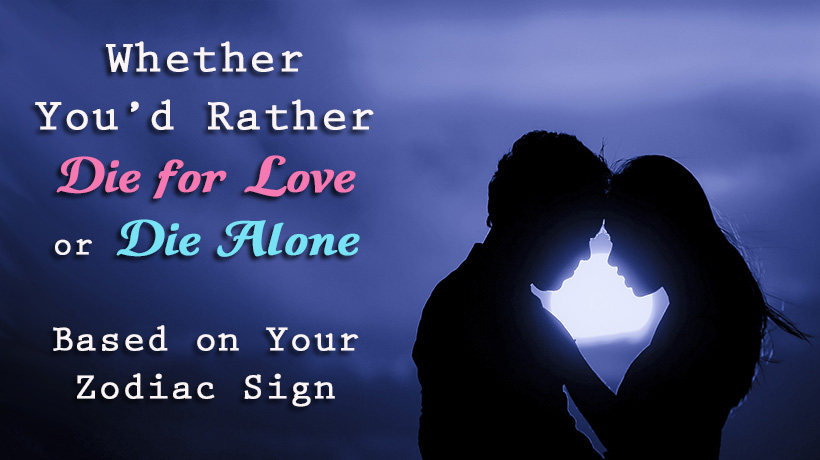 While some may hail this penultimate scene from Romeo and Juliet as romantic, others may think there “never was a story of more woe.” Can we guess which one you are based on your zodiac sign?

Aries (March 21st – April 19th): Die for love
This may be a surprise for some, as Aries is as well known for being as flirty as they are for getting bored easily. However, when this fire sign is in love, it’s extremely passionate and intense, and Aries will want to include their partner in every new adventure they take. They may just need to find someone they won’t get tired to bring this side out of them.

Taurus (April 20th – May 20th): Die for love
This one isn’t much of a shocker. Taurus may be stubborn in their beliefs, but this doesn’t mean that they don’t have a soft side. This earth sign loves stability, and would prefer to be grounded in a relationship than flapping in the breeze. Their need for security leaves them constantly searching for a partner to share their prized material possessions with.

Gemini (May 21st – June 20th): Die alone
Air sign Gemini has a hard time figuring out what they want. They may fantasize about being in a loving relationship one moment, then imagine it as an obstacle they’d need to overcome in the next. Gemini may spend so much time going back and forth with what they want that they end up with nothing at all. But luckily, Gemini is confident enough to handle being alone.

Cancer (June 21st – July 22nd): Die for love
Cancer would probably be the first sign to put their lives on the line for the sake of love. This caring, emotional water sign loves being in love, and wants all the rosy hearts and flowers that come with it. While Cancer can be clingy and smothering, it’s only because they care so much about their partner, and truly want to put their all into their relationship.

Leo (July 23rd – August 22nd): Die for love
For a sign that cares so much about themselves, Leo puts a surprising amount of work into their relationships, showering their partner with love and affection. They prefer personal, romantic relationships where they can be as obsessed with their partner as their partner is with them. Though they still prefer to be in the driver’s seat, they wouldn’t mind having a passenger along for the ride.

Virgo (August 23rd – September 22nd): Die alone
Unlike Taurus, Virgo’s need for stability leaves them running away from relationships instead of towards them. Between their perfectionist habits and their tendency to turn their partner into a project, Virgo finds it hard to settle down with someone who’s good enough for them. For this reason, they’d rather die alone than end up with someone who doesn’t check all of their boxes.

Libra (September 23rd – October 22nd): Die for love
Though Libras may sometimes have a wandering eye, they still find themselves desperately wanting to be a part of a team. Represented by the scales, Libra searches for balance in all aspects of life–work, social, and romantic. When they find someone who helps keep them in perfect harmony, Libra will be loyal to a fault.

Scorpio (October 23rd – November 21st): Die alone
While they’re deeply emotional, Scorpios are also very secretive, and rarely reveal their true feelings. This is because they can be incredibly intense and overwhelming for Scorpio; so the water sign would rather keep the emotional chaos beneath the surface and focus on their personal ambitions. Though they aren’t trying to avoid relationships, they aren’t actively seeking them out, either.

Sagittarius (November 22nd – December 21st): Die alone
The way Sagittarius can never stay long in one place, you’d think they were an air sign. These signs are curious creatures, and view the world with an almost child-like curiosity. They want to see, taste, feel, and experience as much as they can. Obviously, this makes them pretty hard to tie down. This sign would rather die alone than give up their freedom.

Capricorn: (December 22nd – January 19th): Die alone
Capricorn is a sign that’s all about their business, and frankly, they don’t think anyone else can keep up. This earth sign would rather spend their time at the office reading a spreadsheet than at home cuddling their partner. Though they’re not opposed to relationships, they’d need to find a pretty special one to take time away from their work schedule.

Aquarius: (January 20th – February 18th): Die alone
Aquarius is a fiercely independent sign, and all about having enough space to expand their minds. These signs are heavy thinkers and have a hard time finding people who understand them. In addition, they’re extremely logical, and their partners may at times view them as cold or heartless. Rather than struggling to stay in a relationship, Aquarius would rather cut ties and roam free.

Pisces (February 19th – March 20th): Die for love
Pisces is a romantic sign, and loves to daydream about what their perfect relationship would be like. They love to fantasize so much that they may even continue to do so after they’re already in a relationship, ignoring their partners flaws in favor of the idealized version of them they have in their head. For Pisces, love conquers all, and they’d probably be willing to bet their life on it.