Teenager Struck by Lightning Inside Her Own Home 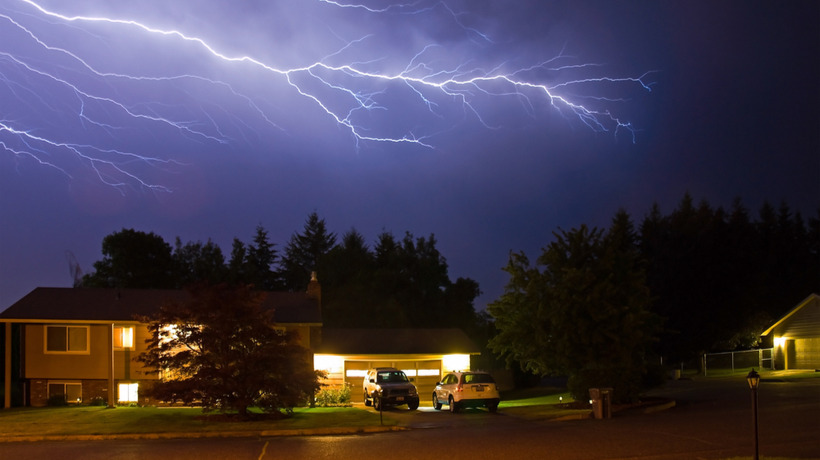 According to a feature in PEOPLE, a 15-year old Pennsylvania girl has been struck by lightning inside her own home.

Remarkably, Giana Scaramuzzo is physically okay despite the fact that the lightning strike traveled through her pinky finger and out of her leg. She quickly received treatment on the scene, and paramedics reported that her blood pressure was normal.

Six houses in North Huntingdon were also impacted by the freak lightning storm; according to the Circleville Fire Department, Giana lived right down the street from a house that was left with a gaping hole in the roof after being struck.

“Thank God everyone was fine,” neighbor Lori Beckowitz, who lives with her husband in the house that sustained roof damage, told the Tribune-Review. Lari’s living room was also damaged, though her husband had thankfully left it just before the lightning struck their house. Lari described hearing a boom that sounded “like a bomb went off next to your ear.”

Giana Scaramuzzo described a similar experience to ABC station WTAE. “All of a sudden I hear the loud sound of thunder, and I see lightning, and I see it reflect from my mirror, and all of a sudden I feel, like, a shock in my pinky,” she says. “Then it goes up my body and out through my leg.”

Giana says that the experience left her feeling “shaky and uneasy,” later adding, “I’m a little scared, still in shock.”

According to the National Weather Service, there were an average of 43 reported lightning strike fatalities per year between 1989 and 2018.

Though getting struck by lightning can result in cardiac arrest at the time of injury, only about 10% of people who are struck are killed. However, the other 90% are often left with varying degrees of disability.

Fortunately, the chances of being struck by lightning are incredibly rare — the NWS reports that there is only a one in 15,300 chance of being hit in your lifetime. Whether Giana is incredibly lucky or unlucky is out for debate, but for now, she’s counting her blessings.