The 3 "Darkest" Personalities & How to Spot Them 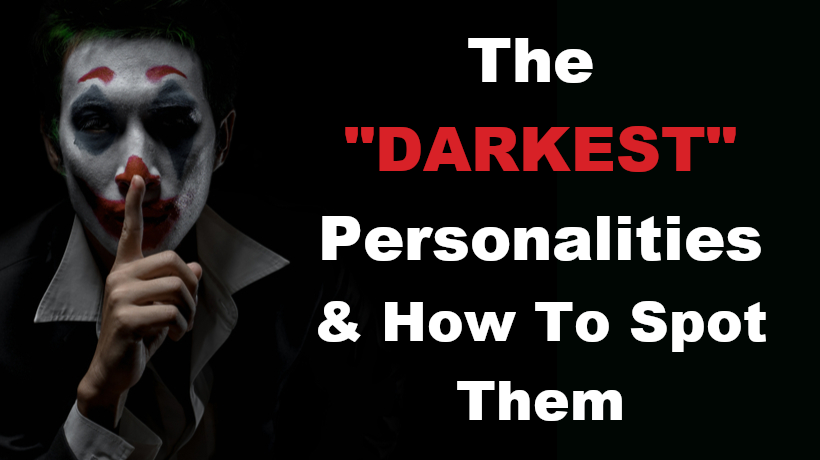 The “Dark Triad” is what psychologists refer to as the most well-known constellation of negative personality traits that lead to offensive, socially inappropriate, or even criminal behavior. Psychologist Mark Travers Ph.D. says that the Dark Triad consists of narcissism, machiavellianism, and psychopathy. Here are the personality traits of the darkest personalities and how to spot them:

Travers states that this is a term most of us are familiar with. It applies to someone who is self-obsessed and who feels that they are unique, very talented, and superior. “Narcissism comes in different flavors. Some narcissists are more focused on viewing themselves as dominant and high-achieving while others exhibit defensive and hypersensitive attitudes in social contexts.” Here is how to spot there is a narcissist in your presence:

• They feed off compliments. Narcissists may seem like they’re super self-confident, but lack self-esteem.
• They are charming at first, but can turn on you easily.
• They “love-bomb” you early on. “If you think it’s too early for them to really love you, it probably is. Or if you feel like they don’t know enough about you to actually love you, they probably don’t,” licensed therapist Rebecca Weiler, LMHC, says. People with NPD will try to manufacture superficial connections early on in a relationship.
• The lack empathy. Psychotherapist Fran Walfish, Ph.D., states that “Narcissists lack the skill to make you feel seen, validating, understood, or accepted because they don’t grasp the concept of feelings.”
• They don’t have many long-term friends or past relationships.
• They gaslight you.
• They’re always right. “There is no debating or compromising with a narcissist, because they are always right,” Walfish says.
• If you are in a relationship, they will panic if you try to end things.

The second member of the Dark Triad is a person so focused on their own interests they will manipulate, deceive, and exploit others to achieve their goals. Machiavellianism is most about manipulation for personal gain. Here are the signs to look out for:

• They’re only focused on their own ambition and interests.
• They prioritize money and power over relationships.
• They come across as charming and confident.
• They exploit and manipulate others to get ahead.
• They are lacking in principles and values
• They lack empathy.
• They are often good at reading social situations and others.
• They can be patient due to their calculating nature.
• They tend to struggle to identify their own emotions.
• They are cynical of goodness and morality.

This is someone who lacks empathy and is dangerously risk-seeking, according to Travers. This is where the word “psychopath” comes from. Here are the signs:

• They tend to be pathological liars.
• They fight against authorities and their rules.
• They get into dangerous situations.
• They come off cold and distant.
• They’re incapable of guilt or shame. They also have NO empathy.
• They love to talk about sex and money, according to the Cornell Chronicle.