The Self-Care You Absolutely Need Based on Your Zodiac Sign 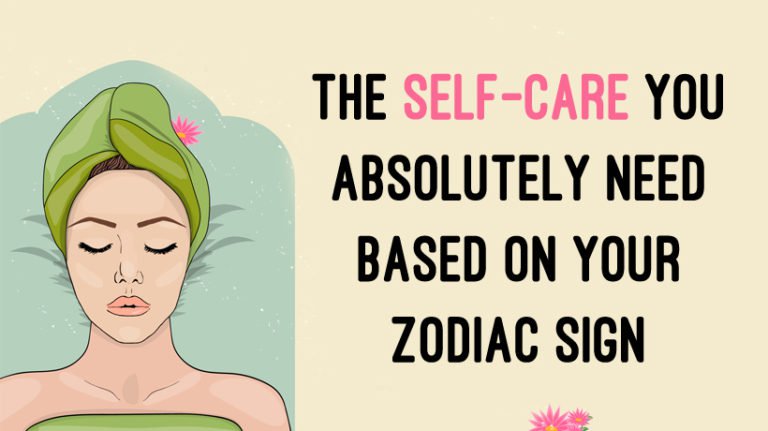 Some people take self-care to mean something temporary – like taking a nice, long bath or eating your favorite candy. In reality, taking care of your body and mind should be a consistent practice. Here’s what you really need to do for you, according to your zodiac sign.

Aquarius (January 20th-February 18th)
Even Aquarius women get tired of being lone wolves all the time, though you struggle with admitting that you need help every now and again. In order to better take care of yourself, start off by reaching out to friends and family – you’ll realize how much they can actually alleviate your worries.

Pisces (February 19th-March 20th)
As a very creative soul, you sometimes feel like you don’t get to exercise this side of yourself as often as you’d like. It would serve you well to allot time to express your originality – you’ll feel much less stressed in the long run.

Aries (March 21st-April 19th)
Aries women have a lot of excess energy. You are strong-willed and motivated, and this intensity carries over into your daily life. When you don’t have an outlet for your energy, you may start to feel frustrated. Take up a kickboxing or Zumba class – you’ll have fun and also relieve the built-up tension.

Taurus (April 20th-May 20th)
As a Taurus, you love the finer things in life, but you sometimes feel so caught up with your routine that you don’t have time to appreciate them. While it’s important to have a set schedule, you deserve to take some time off. Start saving money to take a trip somewhere beautiful when you feel you can make time for it.

Gemini (May 21st-June 20th)
Gemini women have the tendency to make impulsive decisions – that’s because you sometimes have difficulty making up your mind. To minimize stress, try to take more time to reflect on your choices before committing to them. You’ll find that there are certain things that are worth your energy and plenty of things that aren’t.

Cancer (June 21st-July 22nd)
As a Cancer, you’re full of so many emotions that you might not know how to deal with them. Start keeping a little notebook with you at all times. Whenever you’re feeling overwhelmed, write your thoughts down. Once you see your worries written down on paper, they won’t seem so large.

Leo (July 23rd-August 22nd)
Leos love to be in the spotlight, but being the center of attention all the time can be tiresome. Make sure you take time for yourself to be alone. The opportunity for self-reflection can be eye-opening and refreshing.

Virgo (August 23rd-September 22nd)
As a Virgo, you sometimes feel an immense amount of pressure to make sure that everything in your life is perfect – and this mentality is sure to cause you stress. If you feel like things are spiraling out of your control, invest in some sort of planner. It’ll take a huge weight off of your shoulders to see everything you need to do written down in one organized location.

Libra (September 23rd-October 22nd)
Libras value anything intellectual. However, with your packed schedule, it may seem like you rarely have time to do what you love anymore. Carve out some more time to read – a single hour each day or a couple times each week. It can broaden your horizons and stimulate your brain while giving you a break from the stress of everyday life.

Scorpio (October 23rd-November 21st)
As a Scorpio, you have a hard time opening up to new people and deciding who to trust. Instead of withdrawing into yourself, try and go to your closest friends to ask for a second opinion –  they’ll give you the advice you need to hear, especially if you’re wary of someone.

Sagittarius (November 22nd-December 21st)
Sagittarius women are idealists; their heads are usually in the clouds. Sometimes it feels necessary to “escape” reality from time to time, however, learn how to better ground yourself as well.

Capricorn (December 22nd-January 19th)
You can be so focused on your aspirations that you might forget about the people you love. Just like Aquarians, try to surround yourself with friends and family more often. Even though you might think that they could stand in the way of your success, you’d be surprised at the help they’ll be willing to give you along the way.