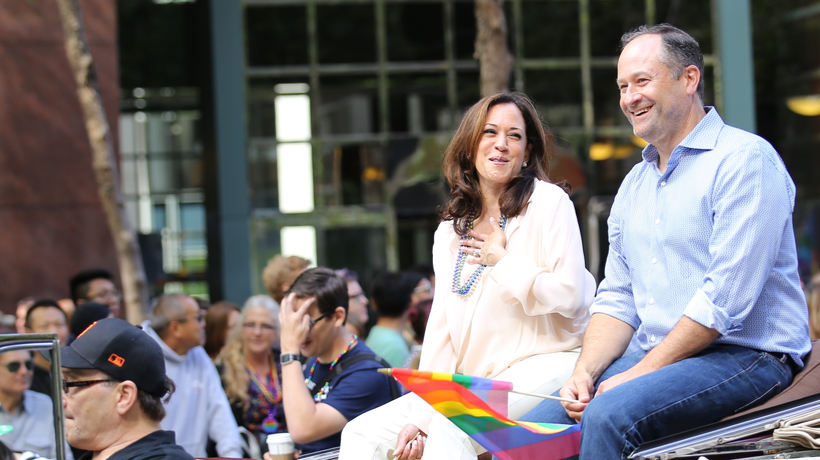 Watching the inauguration of Vice President Kamala Harris standing right next to her was husband, Doug Emhoff. The couple is making history as the country’s first-ever female vice president, making him a notable figure in history as the first-ever second gentlemen.

Before Harris’s presidential journey began, they had a journey of their own, how they met and fell in love. Which she tells in her 2019 memoir, The Truths We Hold: An American Journey.

The couple was set up by their friend, Chrisette Hudlin, who felt that the Brooklyn-born, New Jersey-bred California transplant seemed like someone Harris would like. Harris and Emhoff hit it off first over the phone.

Making this a modern love story, it began with an introductory text from Emhoff, followed by a voicemail the next day, which he thought would end things before they began. “He sounded like a nice guy, though, and I was intrigued to learn more. Doug on the other hand was pretty sure that he had ruined his chances,” she described in her book.

Instead, it was Harris who initiated a call next and after spending an hour chatting on the phone together, chances were not ruined.

They had their first date shortly after. Emhoff said, “One of my buddies was in town, and we went to a Laker game. And so, you know, we [had] a couple of beers, I told him the story. I said, ‘What do you think I should text her?’ So, we sat there in the stands and we came up with this text, which was something like, ‘Hey, it’s Doug. Awkward! I’m texting you.'”

“He seemed so genuinely comfortable with himself. It’s part of why I liked him immediately,” she said in her book. Emhoff was also direct with his feels as well when he emailed her with all the available dates he had coming up. “I really like you and want to see if we can make this work,” said the email. And it certainly did work.

Following a few more exchanges, Emhoff disclosed that he called Harris. “I left this ridiculous voicemail, which she has saved and plays back to me on our anniversary every year,” he told CBS News, adding: “I thought I’d never hear from her again, but …”

“But it was just, it was adorable,” Harris responded, laughing. “And it was just, I mean, the thing about Doug is that he is exactly who he is. He’s just fully authentic and clear about the things he cares about. And it’s family, it’s his work…”

In March 2014, on the eve of a planned vacation, Emhoff could not wait any longer. He dropped to one knee in Harris’s San Francisco apartment. “I looked at him there, on one knee, and burst into tears. Mind you, these were not graceful Hollywood tears streaming down a glistening cheek. No, I’m talking about snorting and grunting, with mascara smudging my face,” she recalled in her memoir.

Now the couple is happily married, and Harris not only became a wife but also a mother figure to Emhoff’s children, Cole and Ella Emhoff. “We’re a very modern family,” she recently told People.

Emhoff, the 56-year-old entertainment lawyer at international firm DLA Piper, has quit his law practice to avoid a conflict of interest.

“Mr. Harris,” she said, referring to Emhoff, “is totally comfortable stepping back so his wife can show her brilliance, grace, grit and power because he wants her to succeed.”

“I understand the role she’s taking and the role that Joe and Jill [Biden] are taking on too and become very close with them, so I support her and I support them and that’s important because what they’re doing is so much. And they’re walking into so many different crises”, Emhoff explained.

Doug Emhoff has shown his support for Kamala Harris throughout the presidential campaign and on social media shares that he is her No. 1 fan!