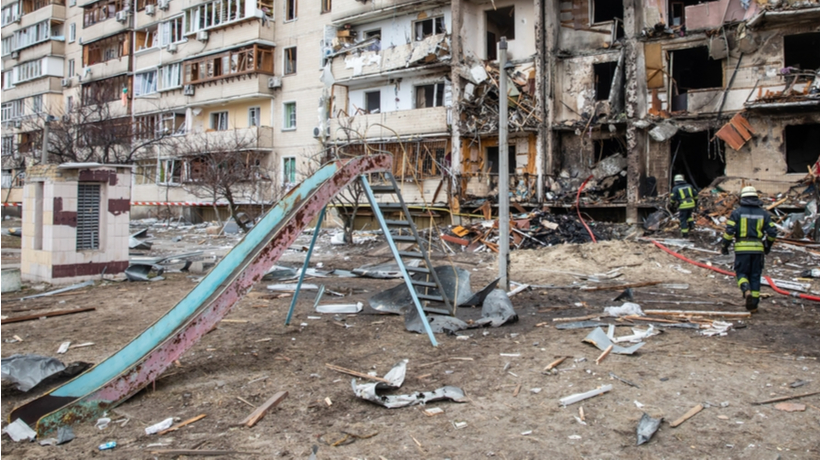 CNN newscaster Erin Burnett had a heartbreaking interview Wednesday with Ukrainian dad Serhiy Perebyinis, who recently learned his wife and two children were killed in the ongoing Russian invasion.

Burnett shared his condolences and asked the father if he thinks he’d ever be able to recover the bodies of his family in order to give them a proper burial.

Perebyinis revealed that he had been able to recover the bodies after driving for three days to the site, and had also recovered the remains of the family dog.

According to The New York Times, Perebyinis had been in eastern Ukraine, taking care of his mother while his wife, Tetiana, tried to flee with the children.

Perebyinis recalled the last conversation he had with Tetiana the night before she was killed.

“That was the day when already there was no water, electricity, gas, and we discussed — I spoke to her at 10 p.m., even though at that point there was no connectivity either. But I managed to get through and had a discussion about potential evacuation,” he said.

He went on to describe the events leading up to his wife and children’s deaths, saying “at the last moment, however, the convoy she was planning to travel with was shelled at and fired at. And then she came on foot to the bridge, trying to make an escape on foot.”

Perebyinis and Tetiana were married for 23 years and in 2012, he said they “even had a second wedding at the church, [because] we wanted to make the marriage lawful in the skies above us.”

When Burnett asked Perebyinis about his children, she broke down into tears in response.

Perebyinis explained how he used Google geolocation to remain knowledgeable about his family’s activities and whereabouts during the war, noticing the morning of their deaths how their location was “unusual.”

“I noticed that there was an unusual geolocation between Kyiv and their pin. And then 20 minutes later, her phone moved to another location, to a hospital in Kyiv. And I suspected something was wrong,”  he explained.

He learned the fate of his family via the news on Twitter.

“And then I saw a photo on Twitter, and I recognized my children. I recognized their things and their clothes. And I called my friends to say that the children are dead. Their bodies are lying on pavement,” he said.

He described his children as “normal, cheerful children.”

At the time of their death, his son Mykita was 18 and in his second year of university. He wanted to become an IT professional.

His daughter, Alisa, was nine years old. He says: “She liked dancing, painting. She studied English.”