What Happens to Your Body When You Stop Drinking Soda 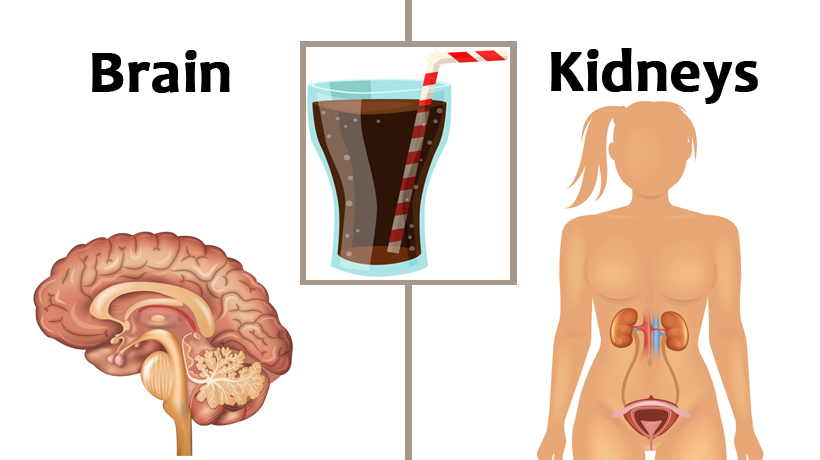 Like most food substances with a generous amount of sugar, soda has often been deemed a root cause of many health problems. We know that drinking water is healthier, but that sweet, bubbly taste is so much more enjoyable when reaching for a thirst quencher that also satisfies cravings.

Some people swear by diet soda as an ingredient to a trim figure, but the additives in diet soda may seriously be detracting from your health. This is even clearer through research that shows what happens to your body when you stop drinking soda.

Aging
When you drink soda, it contributes to aging in a similar manner as cigarettes. A recent study published in the American Journal of Public Health found that people who drank a lot of soda had shorter telomeres in immune cells, meaning their risk of dying sooner was higher. Skimping on this bubbly beverage could help preserve your youth for longer by lengthening your telomeres!

Chronic diseases
Long-term consumption of sugary drinks like soda has been linked to childhood obesity, metabolic syndrome, type 2 diabetes, heart disease, gout, and other chronic diseases. Making a habit of drinking water instead of a can of soda can lower your chance of adding these issues to the list of things you have to worry about.

Shiny teeth
For those of you who have heard that cola can clean rust off of your car’s wheels, it should still be no surprise that soda can behave similarly with tooth enamel. According to a study conducted by the University of Iowa College of Dentistry, the acid in both regular and diet soda can lead to erosion of your teeth’s enamel and root surfaces. The study submerged extracted human teeth in the beverages for 25 hours each, and concluded that acidic beverages are associated with dental erosion and may be a potential oral health concern.

Belly fat
While many use diet soda as a substitute for caloric snacks, a University of Texas Health Science Center San Antonio study found that it can cause weight gain in specific places, like your waist. In a study of 474 participants who were tracked for 9.5 years, those who drank two or more diet sodas per day saw increases 500% greater in their waist than those who didn’t drink it.

Bone health
If you opt for water over soda, you will also improve your bone health and decrease your risk of osteoporosis by avoiding potentially harmful caffeine and phosphoric acid. While science isn’t clear about the role of these chemicals in bone loss, avoiding soda might allow you to choose calcium-fortified drinks instead.

Heart disease
Drinking soda has also been connected to harmful effects on your heart. A 2012 Harvard University study found that sugary drinks increased a person’s risk of chronic heart disease (CHD), while another study showed that drinking soda increases a person’s blood pressure.

Brain function
A study published by the U.S. National Library of Medicine National Institutes of Health found that long-term consumption of sugar could lead to impaired learning, memory, and behavioral plasticity. As if this isn’t scary enough, many other trial studies have also found a link between drinking a lot of soda and an increased risk of Alzheimer’s disease.

Kidney disease
Adding to the list of organs that can be negatively affected by soda drinking, several studies including one conducted by Case Western Reserve University researchers have shown that drinking a lot of soda can increase your risk of kidney disease and ultimately kidney failure. Daily consumption also increases your risk for developing kidney stones by 23 percent according to the Clinical Journal of American Society of Nephrology.

Reproductive organs
Soda cans may contain bisphenol-A or BPA, which has been linked to an increased risk of cancer as well as impairment of endocrine function. A study published by the US National Library of Medicine National Institutes of Health has also shown that BPA is linked to premature puberty or infertility, which messes up a person’s reproductive organs.