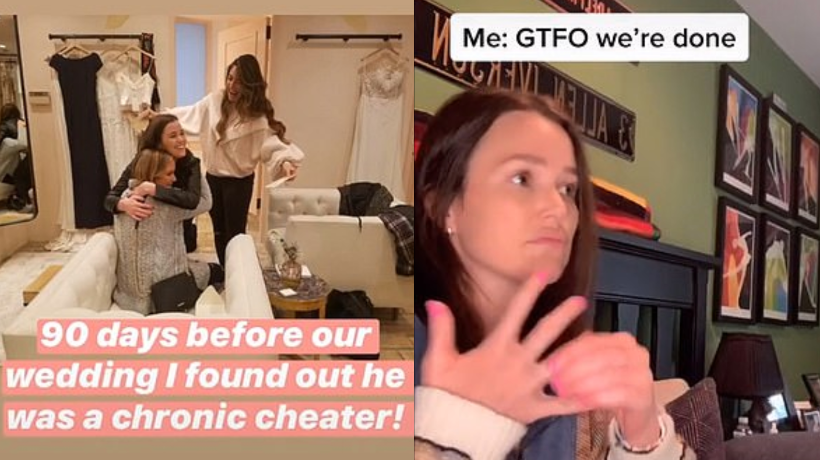 Devin Allen, 31, from Pennsylvania, learned that her fiancé, who she was with for six years, was cheating on her for six months prior to their wedding. Allen has taken to Tik Tok to share her story and all the “red flags” that she ignored along the way to help others break free from toxic relationships.

“I just want to start off by saying that my ex-fiancé was a true piece of work. There were so many things that went wrong in our relationship, so many red flags that I chose to ignore,” she says in one video.

“I’m hoping by sharing some of my stories of things that went on in our relationship it can show other people that there are certain things you are not supposed to tolerate [and] put up with and sometimes people really aren’t who you think they are.”

Devin goes on to recall one of her “favorite stories,” explaining she and her former fiancé were lying in bed one night and watching something on his cellphone when he got a text message that ended up being a video of another woman’s breasts.

She asked him to go back to the message and he did. He sneakily had the number saved under one of his engaged friends’ names. “He said his friend was cheating with a girl they want to high school with, and he was showing off by sending these videos,” she said. “Of course, I believed him. It required no further explanation.”

In another video, she recalls that she caught him rubbing another woman’s thigh at the bar when she and her girlfriends went to meet him and his friends one night. Once he realized she was there, he rushed into the bathroom as if nothing had happened.

“I didn’t want to bring it up to him in the moment because I didn’t want him to explode and embarrass me in front of my friends, which looking back is another huge red flag,” she noted.

When they went home later that night and she asked him who that woman was, he flipped the script and accused her of spying on him. Ah, gaslighting at its absolute finest. Instead of answering her questions, he said he couldn’t marry someone who didn’t trust him.

The gaslighting worked and she admitted that she ended up apologizing to him.

As if this wasn’t bad enough her ex refused to believe she was ill once— even as she was being hospitalized.

She says in the clip that they had gotten into a huge fight, and the next morning she woke up incredibly sick. He accused her of faking it for attention and left to go play golf. Allen started passing out from throwing up so much and called her ex to take her to the hospital. He still didn’t believe her, but after fighting about it, he eventually brought her.

Here’s where it gets worse, he stopped to get food on the way and left her in the car for 45 minutes. When he finally returned, he started eating the food in front of her.

“I’m projectile vomiting out the window because of the smell,” she says. “It doesn’t phase him at all.”

When they finally got to the emergency room, she needed three IVs because she was sick with the flu and a kidney infection.

“While we were waiting, he starts messing with all the different kits they had laid out for anyone coming into the emergency room later that night,” she says of her ex. “Then when the doctor came in and questioned what was going on, again he said I was faking and blamed the entire thing on me.”

In the video’s caption, she revealed the place where he stopped for food on the way to the ER was where the woman he was cheating on her with worked!

One person commented, “That’s not a Red Flag lol. That is God and the entire universe yelling RUN!!!!!!!”

She finally caught him when the universe gave her more than just a bone. “His text messages accidentally were syncing to my laptop, and I found out on his bachelor party he was texting me and his girlfriend the same exact things,” she continues. “He was literally copying and pasting us the same exact text messages.”

After she found out, she broke up with him and called off their wedding. Instead of walking down the aisle, she went to a Beyoncé concert and then hopped on a plane to go to Las Vegas with her friends.

Allen moved into a new apartment, traveled, and at the end of 2019, she launched her company with her friend. The company called d.i.y.BreakUp offers support to those who have had to call off their engagements or weddings.

“Life is so much better now,” she says. Allen’s ex is still dating the other woman, “I hope they’re happy.”

What an inspiring woman is all we can say! Good riddance to him.