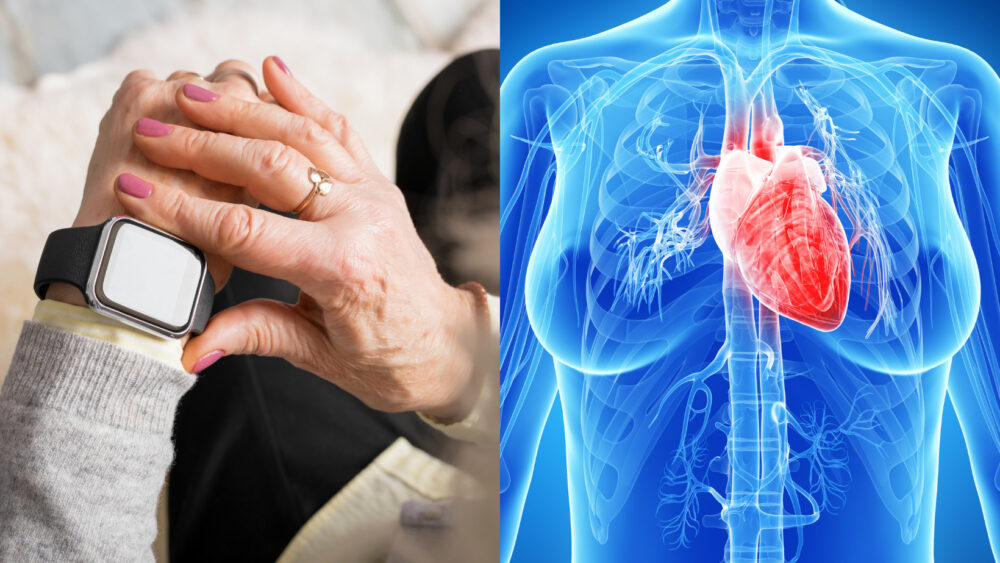 Featured images via Shutterstock and do not depict the patient. Photos for illustrative purposes only.

Two years ago, 67-year-old Kim Durkee was a seemingly-healthy resident of Solon, Maine who got an Apple Watch to count her steps, according to TODAY. Wearing the watch throughout the day — and even while she was sleeping —  became a regular part of her life.

But one night in late May, Durkee’s trusty watch started buzzing on her wrist in the early hours of the morning.  She awoke to find a message on the watch warning her that she appeared to have an irregular heart rhythm, which might have been signaling atrial fibrillation.

According to the Centers for Disease Control and Prevention, the condition, also known as AFib, happens when the upper chambers of the heart aren’t coordinated with the lower chambers, causing the heart to beat too slowly, too quickly or irregularly. That can lead to blood clots, stroke and heart failure.

Meanwhile, Durkee told TODAY she “didn’t have one single hint that there was something wrong in my body, not one.” In fact, Durkee explained the outlet at first explained away the alert as a fluke, because she felt that her breathing and heart rate were fine.

But then the same alert woke her up three nights in a row. On the third night, she received five separate warnings in the time span of four hours.

On June 3rd, Durkee went to the emergency room of her local hospital and told the doctor of her Apple Watch’s messages.

“And he looked at me, like, ‘Really, your watch told you you have AFib?’” she explained. “Everybody in the hospital was amazed. I was like the talk of the hospital.”

She continued: “He did some tests and he said, ‘Your watch is right, you’re in AFib … Doctors said I was like a silent time bomb.”

She continued to undergo tests, including an echocardiogram, which uses ultrasound technology to create images of the heart. The imaging revealed that Durkee had a myxoma, a rare non-cancerous growth in her left atrium.

According to the Cleveland Clinic, typical symptoms of the tumor can include breathing difficulties, chest pain, and dizziness, none of which Durkee experienced. The tumor is extraordinarily rare, with less than $0.02% of people affected.

Fortunately, Durkee’s tumor was successfully removed on June 27th through a five-hour open-heart surgery at a Boston hospital. She asked her surgeon what he believes would have been her fate if she wasn’t alerted by her watch.

“He said, ‘You probably would have had a massive stroke and died,’” she recalled.

Now one month later, Durkee is recovering well. Of course, she still wears her smartwatch 24/7.