3 Things You Learn From a Job You Hate 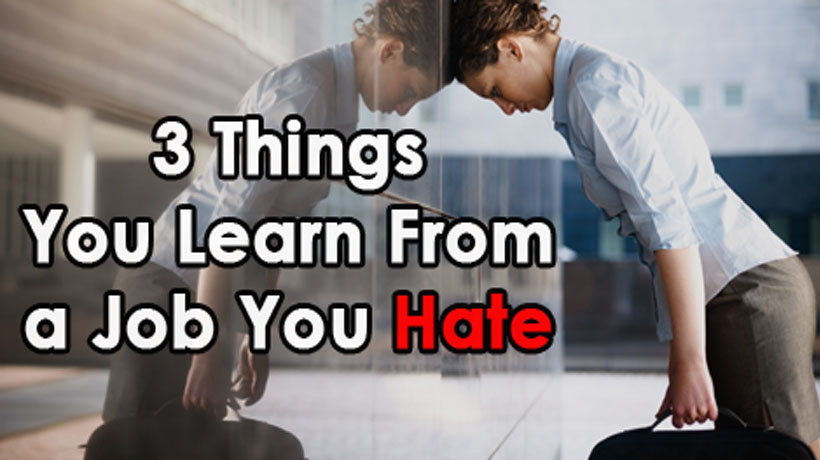 In a perfect world, you’d love your job. You’d earn tons of money, work with awesome people, and have unlimited freedom to do whatever the heck you want.

However, you’re not in a perfect world. You’re in a world where getting up in the morning is complete drudgery, because the thought of showing up in that place gives you the heebie-jeebies. You’re in a world where most jobs are designed to make money, not happiness. You know, deep down, that quitting may be your best option, but your bills aren’t exactly going to pay themselves.

So what do you do? What do you do?
Well, look at it this way. If you managed to last as long as you have in your current job, you pick up these nuggets of wisdom along the way.

Yet, you’re still here. You’re still alive, kicking, and aware enough to realize that something ought to change. As Kelly Clarkson would say, what doesn’t kill you makes you stronger, and resilience is always a handy trait to have no matter where you are.

2. You Learn to Look at the Glass Half Full
When you’re forced to deal with negativity every single day, you have two choices. Either you let it drain every last bit of humanity out of you, or you turn it all around.

Instead of getting annoyed by your co-workers, you take it as a lesson on handling difficult people. Instead of brooding over unfair performance ratings, you celebrate even the tiniest of wins. Instead of reflecting on what could have been, you focus on what could be.

Regardless, you have to do something. You may not make things better at your workplace, but you can still make things better for yourself. Talk to people you trust about your situation, ask them for advice and decide for yourself what to do next. If there’s really nothing you can salvage anymore, it’s best to move on. You can stay and endure until you find a better job, or you can take that leap and create your own company where you can play by your own rules, and be awesome while you’re at it.

As cheesy as it sounds, it’s never too late to change things for the better. Look at your job from a different angle, and you might just find a diamond buried under those heaps of dirty, black carbon.