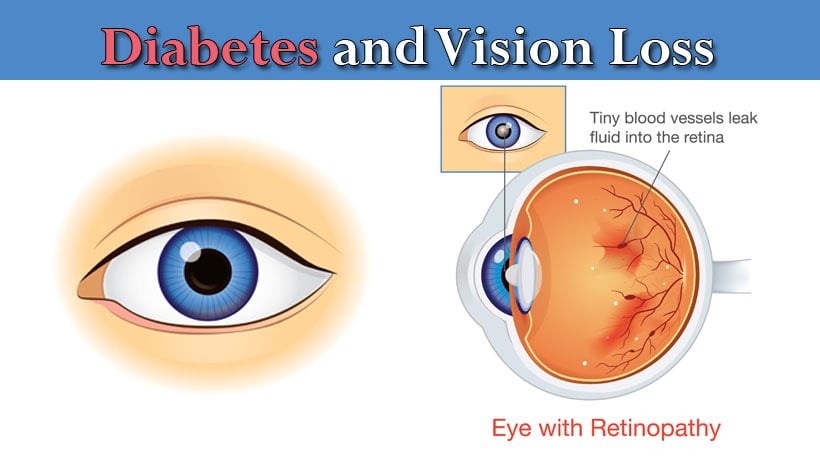 Diabetes plays a role in several threatening health conditions. Heart disease, stroke, kidney disease, and dental problems are all complications that may stem from diabetes. These problems can affect over 30 million Americans who have diabetes, according to statistics from the National Institute of Diabetes and Digestive and Kidney Diseases (from the U.S. Department of Health and Human Services).

One of the lesser-known complications of diabetes is the way the disease can affect eye health. Diabetic eye disease is the name given to four different eye conditions that can develop due to too much blood sugar, or glucose, according to the National Eye Institute (NEI). These include diabetic retinopathy and diabetic macular edema (DME), as well as two conditions that can be influenced by diabetes, glaucoma and cataracts.

All of these conditions run the risk of vision loss and blindness. We’re not completely powerless against diabetic eye disease, though; the NEI says controlling diabetes with medication, physical activity, and a healthy diet can prevent or delay vision-related problems. Yet since some of these conditions often go unnoticed until vision loss occurs, the NEI says people with diabetes should get a comprehensive dilated eye exam at least once a year.

Blood sugar and eye health
Most serious eye diseases begin with blood vessel problems caused by high blood glucose, says the NIDDK. High glucose can cause swelling in the tissues of the eyes that help with focusing. Because of this, diabetics may initially have blurry vision for a few days, especially when they’re changing medicines. This kind of blurry vision is temporary and can go away when the glucose level lowers.

However, when blood glucose stays too high over time, it damages the blood vessels in the back of the eye. These may leak fluid and cause swelling, and new, weaker blood vessels may grow and bleed into the middle part of the eye, leading to scarring or high pressure inside the eye.

Diabetic macular edema (DME)
DME is a consequence of diabetic retinopathy that causes swelling in the area of the retina called the macula, says the NEI. The macula is important for the sharp, straight-ahead vision that is used for reading, recognizing faces, and driving. Although there are usually no symptoms until it affects the vision, doctors can conduct tests that can help with a diagnosis. The NEI says early detection and treatment can reduce the risk of blindness by 95 percent.

Glaucoma
This group of eye diseases can damage the optic nerve, which connects the eye to the brain. Although diabetes isn’t always the cause of glaucoma, people with diabetes are twice as likely to have glaucoma. This disease can lead to vision loss if not treated correctly. The Glaucoma Research Foundation says a rare type called neovascular glaucoma can occur alongside diabetic retinopathy, when the new blood vessels grow on the iris, closing off the fluid flow in the eye and raising eye pressure.

Cataracts
Lenses in the eyes that become cloudier as we age are called cataracts. The NIDDK says people with diabetes tend to develop cataracts at an earlier age than people without diabetes. Researchers believe that high glucose levels cause deposits that build up in the lenses.