4 Signs a Woman is Suffering from Narcissistic Abuse Syndrome (NAS) 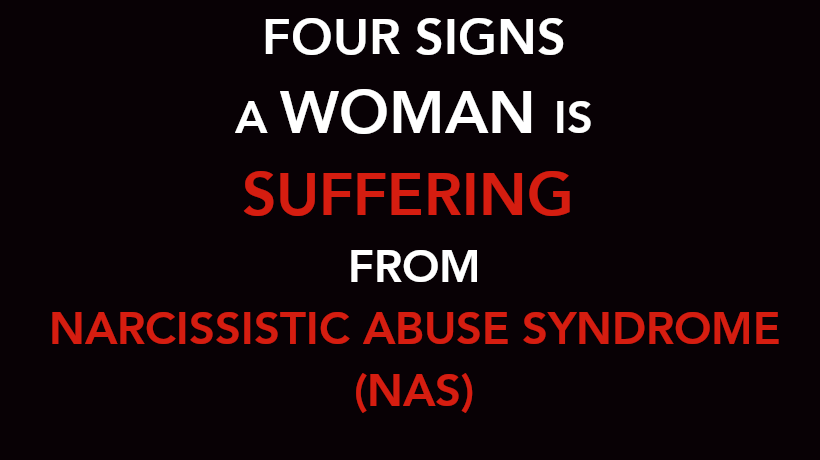 You may not even know if you’ve ever had a narcissist in your life. It’s useful to know what to look out for in a narcissist, but you should also be aware of the symptoms of Narcissistic Abuse Syndrome (NAS). Narcissists want to take control of their victim’s mind and will, says Athena Staik, Ph. D, and this can have lasting negative effects on the health and wellness of their victims:

Narcissists employ their language and behavior to make their victims question their own sanity, says Staik. Due to experiencing intense manipulation, victims are often disconnected from their own emotional pain and mental anguish. They feel an “imbalanced sense of responsibility” for their relationship problems. “She’s lost in a fairy tale illusions that makes her refuse to let go of the belief that, somehow and someday, her love and sacrifice will turn a stone-cold abuser into a prince that sees and cares about her feelings,” says Staik.

They have low self-esteem.

People suffering from NAS often exhibit symptoms of low self-esteem, says Claire Jack Ph.D. This can lead to self-destructive behaviors such as engaging in abusive relationships or increased alcohol consumption. Narcissists will constantly criticize their victims, making them obsessed with their own failures and inadequacy, says Staik. “The end result of a relationship with a narcissist is a slow, insidious, breaking down of the self-esteem of his victims until there’s next to nothing left,” says certified relationship coach Cathy Meyer.

They feel mentally and or emotionally unwell.

Questioning your own sanity and being disconnected from reality can wreak havoc on your mental and emotional health. According to Staik, “Narcissist abuse syndrome exhibits many of the symptoms of posttraumatic stress disorder,” such as nightmares and flashbacks, difficulty concentrating and/or sleeping, hyper-vigilance, and irritability. Meyer says that other signs are poor problem solving, abstract thinking, attention, and decision-making. Many victims also suffer from severe depression or anxiety, says Dr. Jack.

They have poor relationships with others.

Part of narcissistic abuse may be destroying their victim’s other relationships. They may come to mistrust their friends and family, and feel like the narcissist is the only one who really cares about them, says Staik. This could lead to attachment issues, weak boundaries between self and others, and people-pleasing behaviors, later on, says Jack. They may become very antisocial, says Meyer, but a change in someone’s social interactions is a telltale sign of someone suffering from NAS.

If you or someone you know is suffering from NAS, there is hope. The road to recovery is long, says Dr. Jack, sometimes taking years, but it can be traveled. It involves various stages from anger, to acceptance, to relief and eventually to self-acceptance. “The first step in this process is to take ownership of things which have happened to you in your past when you were in a vulnerable position in the hands of a narcissist,” she says.

The Day You Discover You’re a Victim of Narcissistic Abuse