A Good Man Handles His Relationship Differently: Here’s How 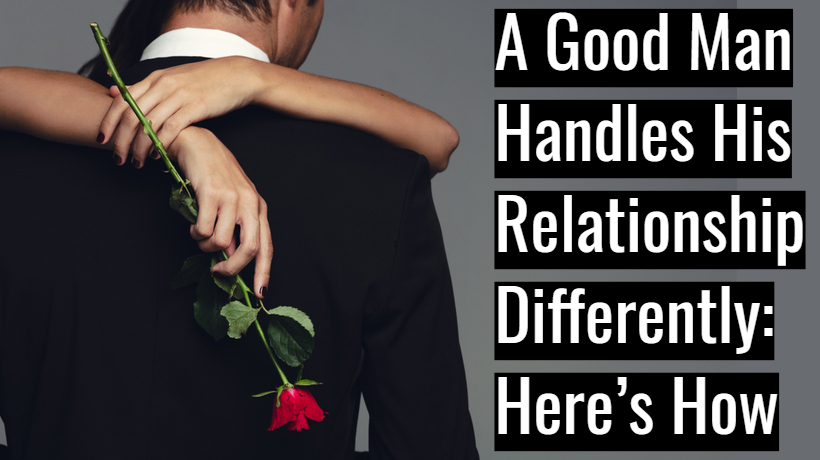 Every relationship has its ups and downs, but once you’ve fallen into a great relationship—the downs can also seem like a walk in the park. Sure, you two will struggle on some days more than others. But the important thing is how you both get through the struggles. If you’ve got yourself a keeper, you’ll find that:

He is able to put aside his ego

In order to come to a solution together, men will reluctantly need to swallow their pride sometimes—even when they are too stubborn to admit they are wrong. Ladies, this is no easy feat (even for us!) But if you’ve got a great man in your life, he’ll listen to your side of the story and take an unbiased approach—no matter how difficult.

He is willing to compromise

If he’s giving up watching his regular Football Sunday to take you to that overly hyped art exhibit that you’ve been dying to go to, you know you got it good. He frequently puts your interests over his if it means having the chance to see your face light up. If it’s something he’s especially not interested in, bonus points for him.

He finds you beautiful

Yes, even when you’re sporting the “no makeup” look and are lounging at home in your sweats and messy bun. He secretly loves it. Maybe even more so than when you’re dressed to the nine.

He finds ways to surprise you

It might not be your birthday or anniversary for another six months, but that’s never stopped him. A great guy will try to appease you, even in the smallest of gestures—like washing your car or cooking your favorite meal before you get home from work.

He trusts you (and is also trustworthy)

There’s no need for him to question who you’re out with at the bar, or who is texting you at night. He trusts that you have his best interests in mind and wouldn’t do anything to jeopardize what you two have. Similarly, he’s never led you to believe anything otherwise either.

He is there for you

The most important part of a relationship is the friendship. Your guy should be able to treat you as he would his best friend. That is, in the sense that he will listen to you, support your decisions, and can give you some thoughtful advice. Maybe you’re mulling over how to tell your manager that you need a raise. He is happy to add his two cents on how to make sure you get what you deserve, and follows through to make sure you got it.

He introduces you to his family and friends

He’s also inclined to meet yours. You know he’s thinking about the relationship seriously when he’s willing to branch out of the bubble you two have made for yourselves. By introducing you to his family and friends, he’s letting them know that it’s time for the most important people in his life to now cross paths.

He accepts your flaws

Let’s be real. We all have our baggage, no matter how small. We also all have our alter-egos that can sometimes drive people crazy. Your man recognizes your bad habits—the way you can easily binge hours on end of Netflix without stepping a foot outside the house, the way you forget to refill the toilet paper roll in the bathroom, or the way you fidget with your hands when you’re nervous.