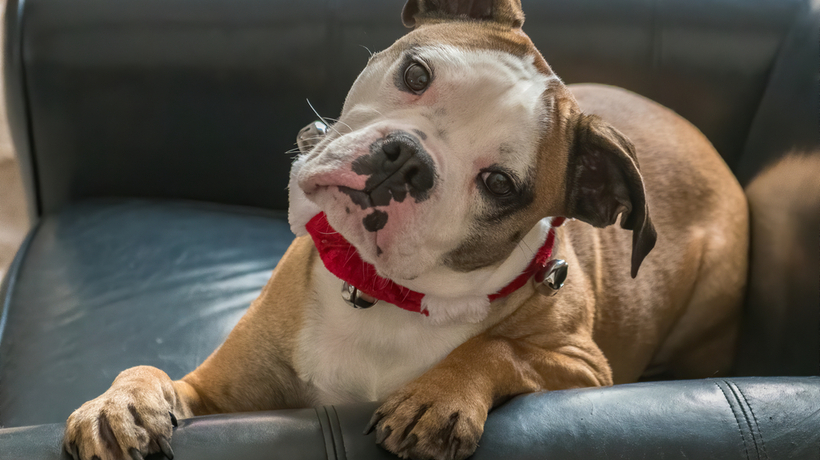 Featured image via Shutterstock and does not show Freya or her puppy. Photo for representational purposes only.

On January 27th, in Nova Scotia, three-year old valley bulldog Freya gave birth to seven healthy puppies. His owner, Trevor Moser, began to clean her up so she could rest, when suddenly Freya went into labor again. It was just after the surprise puppy was born that Trevor and his wife, Audra Rhys, noticed the first sign that something was off.

The puppy was encased in a black sac, unlike the previous puppies, who were all in translucent sacs. At first, the couple thought that the puppy was stillborn —  until it started to move and make noises.

When the couple started to clean him off, they noticed the puppy’s fur had a very bright green tint.

“We noticed she was green and immediately thought there was something wrong. So we Googled it, ‘my puppy is green, what’s wrong,’ and apparently it is very rare and it has happened a few times all over the world,” Mosher told Global News.

According to CNN, this rare discoloration happens when light-colored puppies come into contact with a green pigment that’s found in bile. The pigment dyes the fur when the puppy is in the womb but then begins to fade after the puppy is born.

Mosher feels very lucky to have seen the discoloration for himself.

“I’m kind of amazed, really,” he said. “As rare as it seems to be, I feel very lucky to have witnessed it and be a part of it. I know you hear stories about things like that but to be there and witness it, it was good.”

Mosher says he posted about the green puppy on his Facebook page, asking for recommendations on what to name her.

“A lot of people came up with some pretty clever answers. A few of them were Wasabi, Fiona, Hulkette and Pistachio…. kind of like that one, it’s cute,” he said.

Rhys told PEOPLE that the healthy puppy is already starting to lose her coloring and is now “a light lime green.”The name they settled on? Fiona, after the green ogre princess from the movie Shrek.