Is He Committed to You Based on His Zodiac Sign? 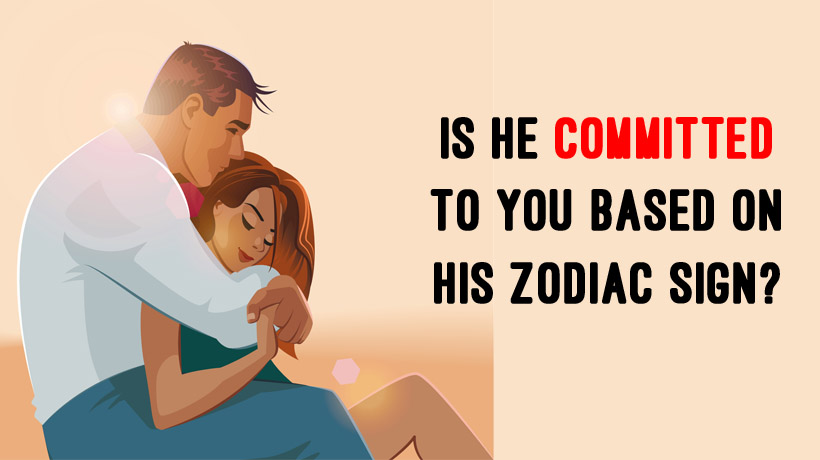 Zodiac signs may reveal certain patterns, but know there will always be exceptions. If you’re involved with someone who doesn’t fit these characteristics, let your intuition be your guide.

Aquarius
If you’re involved with an Aquarius, you may already have experienced some challenges in your relationship. Aquarius men, although sociable, like to keep things on a lighter level to avoid anyone from getting too close. For them, the idea of intimacy is tough to grasp as their independence reigns supreme above all else – they feel uncomfortable with the idea of “answering to someone.” If you’ve been successful in your relationship with the Aquarius man, you can count on the fact that he’s loyal to you.

Pisces
The Pisces man seems too good to be true – wildly passionate, sensitive and empathetic. You would think they make the best lovers, but their fear of commitment is very present. They’re not so much in love with the idea of settling down with one person for the rest of life as they are with the idea of love itself. They may be more interested in the pursuit rather than the long haul.

Aries
If you’re smitten with an Aries man, beware that his tastes are very particular. He will either play the field or completely devote himself when he’s found his ‘soulmate’ (there’s no in-between with him). If he has proven his commitment to you, it’s likely he’ll be loyal to you for life.

Taurus
The Taurus man has no time for games. He’s ready to settle his roots down and build a family – stability is everything to him. So it’s important that he finds the right mate to grow old with. If you’re the one for him, he’ll pursue you no matter the odds.

Gemini
Generally speaking, Gemini men don’t do well with commitment – it’s almost laughable for them. Since men of this sign crave variety at all times, he’ll only really be comfortable in relationships with fascinating women who are able to give him plenty of space.

Cancer
If you’re in love with a Cancer, you’re in luck. These men are all about setting firm foundations to build their own family legacy. If you’ve been with one for a while, he may be looking to (or already has) settle down and take the next step in the relationship with you.

Leo
The Leo guy is all about that “best friend” type of love. He enjoys the fun and easygoing side of a relationship but can also be quite the romantic, expressing his love for you with gifts and lavish things. If you’re the other half that he’s been looking for, you’ll have his heart for the long run.

Virgo
Virgo men love to be in control. They feel a sense of duty when it comes to relationships, and are attracted to women who they can “rescue” from their troubles. It’s easy for women to become co-dependent with a Virgo man as a result. But he needs to be willing to let his guard down and learn to trust you in order to take the relationship to the next level.

Libra
Be patient – the Libra man can sure take his time before deciding whether or not he’s in it to win it. He’s all about balance and fairness, and wants his relationship to reflect that in the best way possible. His indecisiveness will subside if he’s made up his mind that you’re definitely the missing piece to his puzzle.

Scorpio
The Scorpio man may keep you on your toes. On one hand, he yearns to become part of a power couple but on the other, he fears commitment. Intimacy frightens him because of his fear of abandonment. You can never be too sure where he stands.

Sagittarius
Sagittarius men need to feel free when they’re in love. In that sense, it may take a while for him to be open to the idea of sharing his life with another person. Until he’s mature enough to settle down from his many adventures, he may not be the best partner to rest your hopes on.

Capricorn
If you’re seriously involved with a Capricorn man, you can bet that he’ll move quickly. He’s the guy who will want to marry you, have kids, create a legacy, make his ancestors proud and pass down family traditions over time. He’ll either give it his all or back out if you’re not the one he can envision the future with.