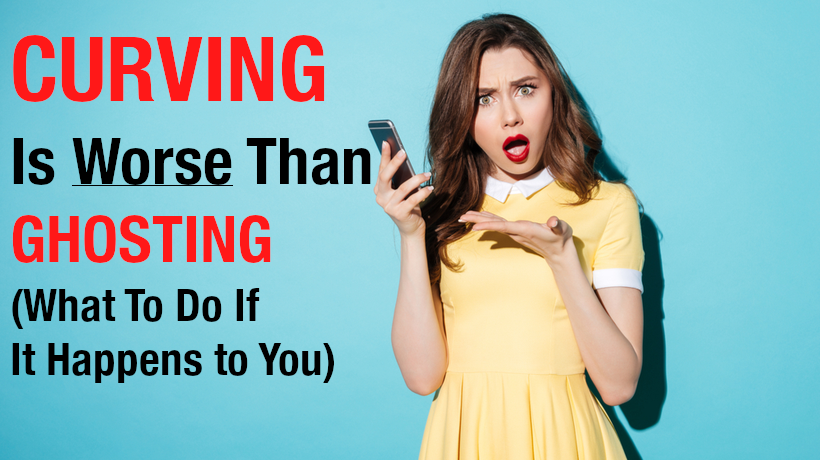 No one likes to get rejected, but that is part of the dating scene. The latest form of unwanted rejection is called “curving.” It could even feel worse than someone ghosting you because when someone is curving you instead of coming out and saying they are not interested directly, they will be subtle enough that it keeps you hanging on. It can be frustrating to understand, so we’ll explain curving, so you won’t have to suffer if it happens to you.

Curving is ultimately a conversation that slowly becomes more one-sided. The majority of the conversation is upheld by the person interested in a relationship, and the other person is the “curver.” The curver will gradually express less and less interest in you, and even will stop texting you for hours or days at a time. They prefer to keep the interactions online, and never take the initiative of actually meeting in person.

Curving someone is a passive-aggressive way to show someone that they are not interested without actually telling them, which is why it makes it worse than ghosting. “People are afraid of confrontation,” explains Anna Rosen Spector, Ph.D. “So, rather than saying, ‘I don’t want to see you anymore,’ they’ll say, ‘I’ll call you later, or next week.’”

Curvers think they are sparing your feelings by letting you down in a gentle way, but if you don’t take their hints of not wanting to go out on a date, you become the one wasting your time. According to Spector, they don’t realize how much more painful and damaging elongating a rejection can be.

Why Do People Do It?

Curving is easiest if you have only talked to someone over text or on the phone rather than meeting in person. Conversations will completely rely on the other person to do the talking, and all they do is respond in as much of an uninterested way as possible. They will never initiate a conversation.

Curving is said to be due to a lack of communication skills. “It’s normal human behavior to feat conflict; however it’s important to treat people respectfully so that you keep your heart karma clean,” say dating coaches Orna and Matthew Walters.

Other people can also use curving to keep you around without addressing the question of labeling your relationship into something more serious. They will avoid the question or quickly switch the subject. Confronting them can even lead them to ghost you too. In the end, this is a dishonest way of dating.

How to Deal with Being Curved

“We don’t want to hear that somebody’s not interested in us, but that’s the reality,” says Spector, so instead of waiting for them to come around and be honest, take the hint that they are not interested and move on.

You need to put your feeling before theirs and remember that it is not a way in which you want to be treated in a relationship. If they are not asking to actually meet in person and not responding to you in a more appropriate timely manner, it is time to look for someone else who will. Someone who wants to be with you will put in the effort to impress you.