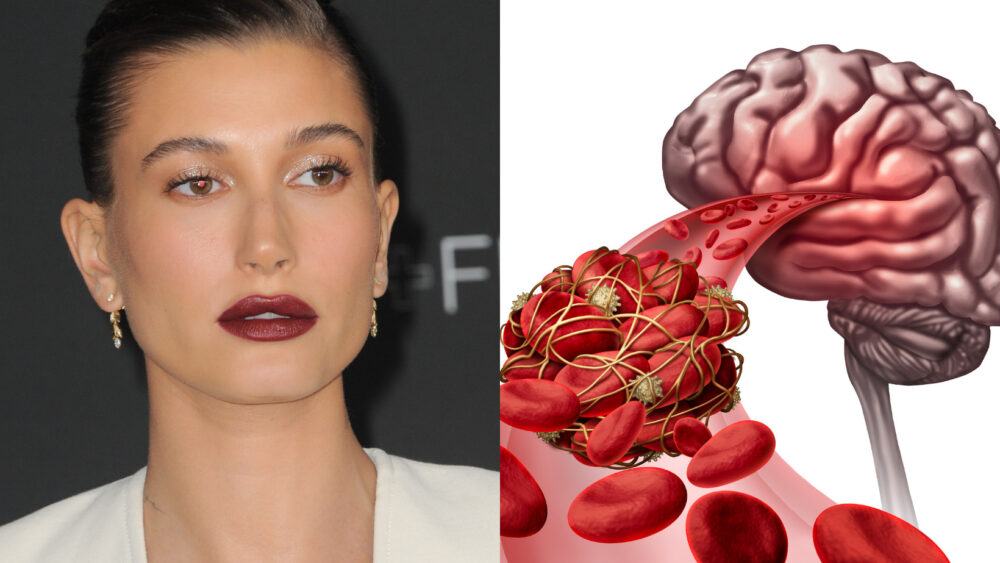 For the first time since March, Hailey Bieber is opening up about her hospitalization for a terrifying health scare.

On April 27, Bieber posted a video on her YouTube Channel detailing her experience with stroke-like symptoms from a blood clot that traveled from her heart to her brain.

In her video, Bieber explained that she wanted to tell the story in her “own words.”

Bieber said that while at the breakfast table with her husband, Justin Bieber, her right arm developed a “weird sensation” and her fingers felt “numb and weird.”

When her husband asked if she was okay, Bieber found she couldn’t speak.

“The right side of my face started drooping, I couldn’t get a sentence out,” she recalled. “Immediately, I thought I was having a stroke.”

“[It was] definitely the scariest moment of my life,” she added.

A medic began examining her and an ambulance was called. Bieber says that the facial dropping lasted about 30 seconds, but she struggled to formulate answers to questions.

“By the time I got to the emergency room, I was pretty much back to normal – [I] could talk, [I] wasn’t having any issues with my face or my arm,” she said.

Bieber stayed overnight in the hospital and underwent a series of tests to determine what caused the blood clot.

The tests showed that Bieber had suffered a transient ischemic attack (TIA,) often referred to as a mini-stroke. Her brain had suffered a lack of oxygen caused by the blood clot.

Doctors weren’t sure how the blood clot traveled to her brain, but Bieber was discharged the following morning.

Later, Bieber visited UCLA for a follow-up appointment. There, she was diagnosed with a Grade 5 patent foramen ovale (PFO,) a small hole in her heart. Additionally, she had just started taking birth control without speaking to her doctor, which is ill advised for people like her who suffer from certain types of migraines. She had also recently recovered from COVID, and had been traveling “from Paris and back in a really short amount of time.”

Bieber confessed that she was just “grateful” to know what had caused the stroke. Due to her PFO, the blood clot “escaped” from her heart and traveled to her brain.

Bieber went through a procedure to close the PFO and shared that the procedure went “very smoothly.”

Bieber said she wanted to wait until she underwent the procedure and “everything had gone smoothly” before sharing the details of her experience publicly.

“If there’s anybody that watches this that has gone through the same thing or something similar, I definitely really empathize with you,” she said near the end of the video. “And I understand how life-altering and scary it is.”