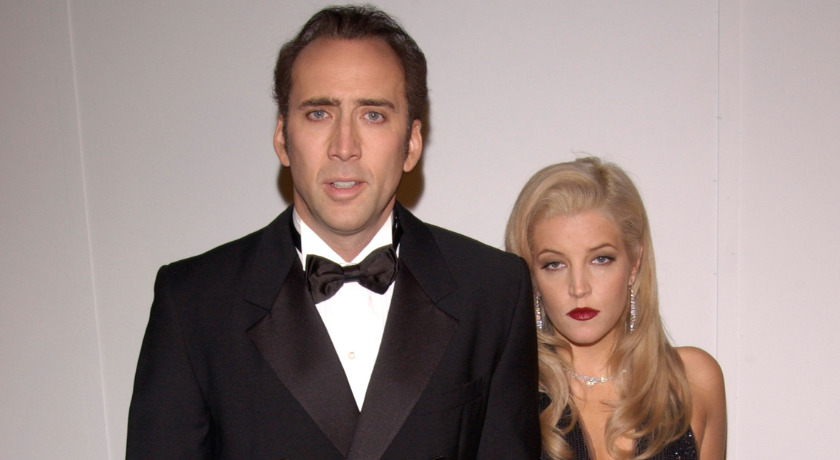 Following the death of Lisa Marie Presley, her ex-husbands have shown nothing but love and grief over her loss. Lisa was married to four different people throughout her life: Danny Keough, Michael Jackson, Nicolas Cage, and Michael Lockwood.

Lisa’s first husband was musician Danny Keough. They started dating in 1985 before tying the knot three years later when Lisa was only 20 years old. Her mother, Priscilla, approved of the marriage having been of a similar age when she wed Elvis in 1967.

“I am thrilled for Lisa Marie,” Priscilla told People at the time. “Danny is a great guy, and I couldn’t be happier for the two of them.”

The couple were quick to work as they welcomed their first child, Danielle Riley Keough, the following year. Their late son, Ben. was born in1992, three years later. Unfortunately, the marriage wouldn’t last much longer and they divorced in 1994.

However, they maintained a close relationship afterwards, even to the time of her death. Danny featured as a bassist on Lisa’s debut album in 2003, To Whom It May Concern. She compared their post-marriage relationship–in which they successfully were able to co-parent their two children–to that of “like brother and sister”.

“Ultimately this is a good message to send out to people,” she said in regards to them working together musically. “You don’t have to put your crap on your kids even if you are not together. You can still be civilized. I knew at the age that I had the kids with him that Danny was someone I could be connected with for the rest of my life. I knew he would be a good father.”

Keough was living in a rented home with the late singer and her twin daughters, Harper and Finley, at the time of her death.

Lisa married a second time in 1994 to the King of Pop, Michael Jackson. The two met decades before, when Michael was still a part of Jackson Five. Their marriage happened only weeks after her divorce to Keough.

Lisa confirmed the rumors of the couple’s wedding weeks after the fact, saying, “My married name is Mrs. Lisa Marie Presley-Jackson.”

The then newlyweds publicly debuted their marriage at the 1994 MTV Video Music Awards by sharing a kiss on stage, in which she later revealed in an interview with Oprah Winfrey she was “uncomfortable” with.

“He knew I didn’t love that,” Lisa admitted. “I would be there, uncomfortably. And his hand was blue after we got off that stage…I had squeezed it so hard…But as his wife, I needed to do some things like that.”

In that same interview, which took place a year after Michael Jackson had passed away, she talked about how she saw too much of her father’s issues within the late pop star’s own character traits, including his drug addiction and power dynamic between himself and those whom he worked with.

“The one thing that correlates with Michael and with my father on this subject is that they had the luxury of creating whatever reality around them they wanted to create,” Lisa told Oprah. “They could have the kinds of people who were going to go with their program or not go with their program. If they weren’t, then they could be disposed of.”

They were only married two years, divorcing in 1996 because of “irreconcilable differences,” according to Lisa.

“We are saddened by the sudden tragic loss of Michael’s former wife, Lisa Marie Presley. Michael cherished the special bond they enjoyed as apparent in the official video for ‘You Are Not Alone’, and was comforted by Lisa Marie’s generous love, concern and care during their times together.”

Lisa became involved with musician John Oszajca in 1999, and were engaged 16 months before calling off the wedding in 2001.

A month later, Lisa went public with her relationship with actor Nicolas Cage. They met in 2000, at a birthday party for Johnny Ramon. They wouldn’t date for another year and maintained their relationship for a year more (while briefly splitting up) before they wed in August 2002.

Their marriage didn’t last, though, as they separated only four months later.

“I’m sad about this, but we shouldn’t have been married in the first place,” she said in a statement.

Their divorce was finalized in 2004.

Cage spoke to the Hollywood Reporter about Lisa’s passing, saying, “This is devastating news. Lisa had the greatest laugh of anyone I ever met. She lit up every room, and I am heartbroken. I find some solace believing she is reunited with her son Benjamin.”

Lisa’s final marriage was to guitarist and music producer Michael Lockwood in 2006. The couple welcomed their twin daughters, Harper and Finley, in 2008.

At first, their marriage seemed to be working out well, with Lisa saying Lockwood was “the most understanding person [she’s] ever met.”

However, after ten years into their marriage, the couple broke up and embarked on five years of a messy divorce and custody battles.

The divorce was finalized in 2021 and Lisa maintained 60% custody of her daughters. Now the custody may be subject to another legal bout between Lockwood and various other members of Presley’s family.

Lockwood’s lawyer did release a statement, however, regarding Lisa’s passing on behalf of Michael.

“Michael had been hoping for a speedy and complete recovery because her children needed her. It is very sad it didn’t turn out that way. Michael’s world has been turned on its ear. He is with both of his daughters now.”