How Intuitive Are You Based on Your Zodiac Sign? 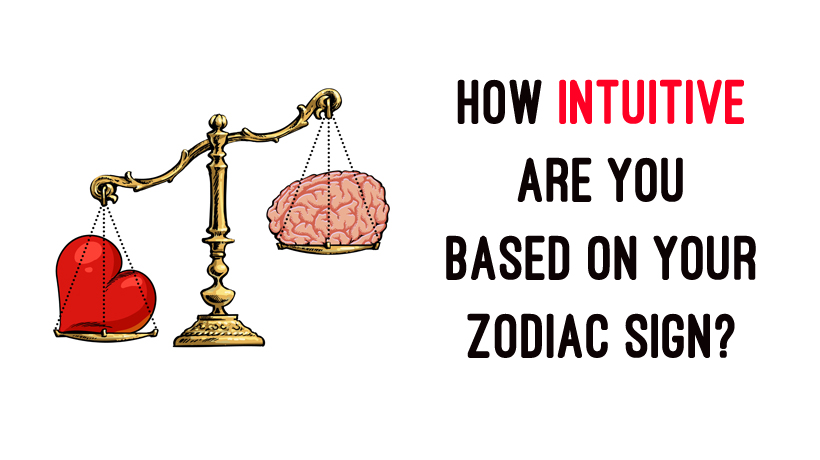 We’d like to think that our gut functions as our “second brain.” And more often than not, it may be best to follow its lead rather than that of our mind when it comes to making the next move. Here’s how you fare in comparison to the others when you’re dealing with matters of the heart.

Aquarius (January 20th-February 18th):
As independent as you are, you tend to take things on a less than sentimental level – unless it involves the environment or other social issues. It may seem foreign for you to trust your gut; you’d rather work out of the knowledge that what you are doing may impact the greater good.

Pisces (February 19th-March 20th):
Inarguably the most intuitive of the zodiac, you’re deeply in tune with the emotions and energies of yourself and of others around you. Since you’re connected with the idea of a higher power, even if it’s simply your conscience, you’re always willing to trust your instincts without hesitation.

Aries (March 21st-April 19th):
You are the definition of headstrong, and by default, your brain reigns supreme. Even if you have a hunch that a certain situation seems “off,” you’ll still trudge on – it’s hard for you to back down from a challenge.

Taurus (April 20th-May 20th):
You assess situations meticulously to determine if they’re worth your time and effort, so even if an opportunity strikes that seems promising, you won’t act out of impulse. You have a keen sense on what is more deserving of your energy –– and it’s usually your original plan.

Gemini (May 21st-June 20th):
You have the tendency to wrestle with two egos due to your dual nature, so decisiveness isn’t exactly your strong suit. Try tapping into your heart from time to time. Sometimes it may be your true guide.

Cancer (June 21st-July 22nd):
You don’t take much lightly; you’re quite the sensitive soul. So it’s no surprise that you let your inner voice lead the way most of the time. Just remember not to harbor any ill feelings toward those who don’t have as heightened of a sense to it as you do.

Leo (July 23rd-August 22nd):
Although you’re truly in tune with your own feelings, tapping into others’ may be a bit of a struggle for you. Learn to open your heart toward giving rather than taking.

Virgo (August 23rd-September 22nd):
“Analysis paralysis” is your biggest downfall, and so you may have a hard time wrestling whether the first emotions you feel are actually the ones you can trust. You know yourself better than anyone else does – trust that.

Libra (September 23rd-October 22nd):
Once you’ve made up your mind, it’s a struggle to persuade you otherwise. You have a keen sense of what’s fair and just – anything that seems questionable to your beliefs is a no-go.

Scorpio (October 23rd-November 21st):
You are highly intuitive and astute. Your keen ability to recognize toxic people before they strike serves you well in filtering out the pesky weeds from your lush garden. But don’t let them shut your heart out to those who have done nothing but to earn your trust.

Sagittarius (November 22nd-December 21st):
You love being able to make your own decisions – and they’re usually the right ones –  though you may need to work on being more cautious with trusting those of others. The good thing about that is that you’ll seldom make the same mistake twice.

Capricorn (December 22nd-January 19th):
Due to your cautious nature, you may at first be hesitant about trusting your gut – even if it ‘feels right.’ You typically assess the situation from all sides to see if the next move is really worth the plunge. It’s OK to step out of your comfort zone from time to time. The greater the risk, the greater the reward.