Psychologists Reveal How Spanking Can Harm a Child’s Mental Health 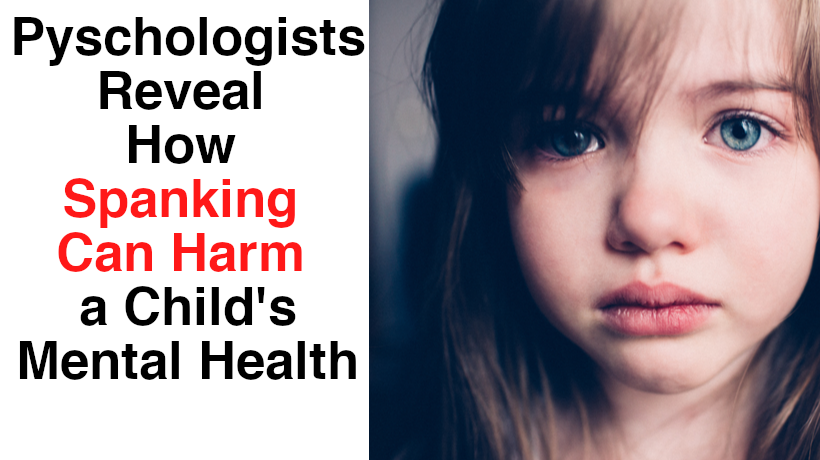 Spanking could have been a form of punishment used on you growing up, but research and psychology reveal that it can affect a child’s mental health. “We know that children whose families use corporal punishment are more likely to develop anxiety, depression, behavior problems, and other mental health problems, but many people don’t think about spanking as a form of violence,” said Katie A. McLaughlin, director of the Stress & Development Lab in the John L. Loeb Department of Psychology. Here are ways in which spanking can affect a child’s mental health.

Spanking can cause a child to develop low self-esteem. When they are hit, they feel as if something is wrong with them and don’t regard what else they are being punished for. Elizabeth Gershoff and Andrew Grogan-Kaylor from the University of Texas at Austin and the University of Michigan evaluated 75 publishes studies on the relationship between spanking by parents and various behavioral, emotional, cognitive, and physical outcomes among their children. They found that it associated with 13 out of 17 negative outcomes they assessed, including problems with mental health and reduced self-esteem.

Child Is Made to Feel Powerless

Putting a child into the position where you will spank them, puts them in a position where they feel powerless and afraid. When anyone is made to feel helpless, it can even cause them to act out even more. According to Amy McCready, author and Certified Positive Discipline Instructor, children are vulnerable, easily influenced, and prone to fear. Children feel powerless especially if fear is involved. McCready says that even though parents “win” the battle with their children over misbehavior, to do so can make them afraid, unsettled, and unstable, which can produce life-long psychological effects.

As parents, it is important to teach children positive ways to cope with mistakes. Spanking them when they do something wrong teaches them that what they have done is wrong but don’t know how to fix it, building them up for feeling guilt and not knowing how to cope with it. This inability to learn healthy coping skills can affect them in adulthood. A study of more than 8,300 people, published by the University of Michigan, found that adults who were spanked as children were more likely to feel depressed, attempt suicide, drink heavily, or use illegal drugs.

Children today are being taught how to respect their bodies and to keep people out of their personal space. But if you cross those boundaries because you want to teach them a lesson, their trust will be broken not only by you but by others as well. The child will begin to question whether people have their best interests at heart. “They become very cautious in interactions with other people and they kind of assume the worse,” says Greshoff.

If your child is having an issue or is acting out, they will not learn how to talk to you if they know the outcome of their actions will be spanking them. They will not know how to effectively communicate what they are feeling or having troubles with as a child or into adulthood. It is important to find different ways of solving a problem that will help them more than hitting them. The American Academy of Pediatrics discourages parents from spanking, as they say, it is ineffective and teaches aggressive behavior.