Remembering the Victims of the Uvalde, Texas Elementary School Shooting 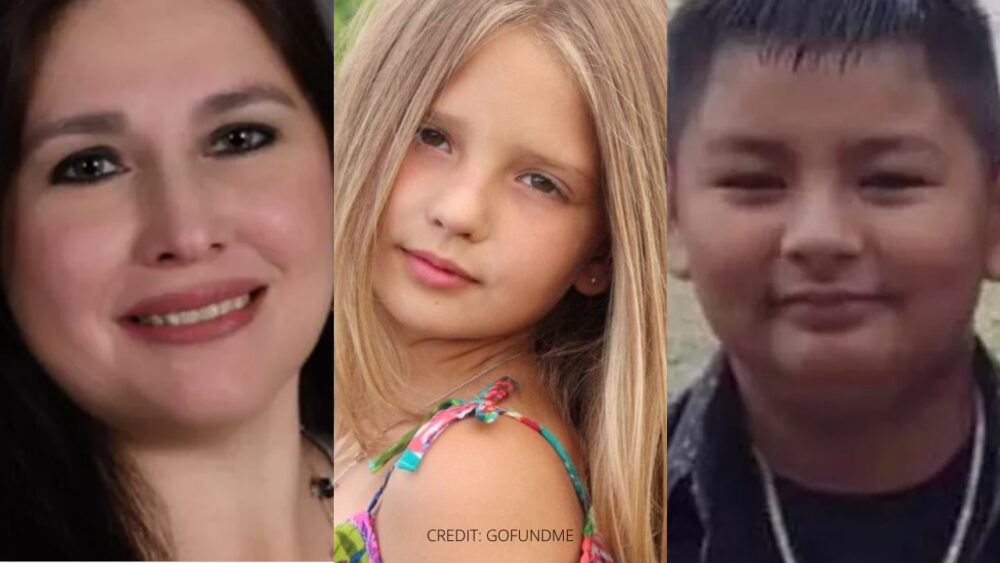 America and the world is in mourning after Texas faced its deadliest school shooting in modern state history on Tuesday, when 18-year-old Salvador Ramos opened fire at Robb Elementary School at around 11:30 a.m. central time and killed at least 19 children and two teachers.

As reported by PEOPLE, here is what we know about the two teachers and 19 third and fourth grade students, whose bright futures were tragically cut short.

She shared in her teacher bio that she loved running and hiking and had been teaching fourth graders for the past five years. Mireles’ daughter Adalynn paid tribute to her mother on Twitter Wednesday morning, writing, “I want to thank you mom, for being such an inspiration to me. I will forever be so proud to be your daughter. My sweet mommy, I will see you again.”

Irma Garcia, who had been a teacher at Robb Elementary for 23 years, is remembered as a loving wife and mother to four children.

“Sweet, kind, loving. Fun with the greatest personality,” read a GoFundMe page set up in her honor. “She sacrificed herself protecting the kids in her classroom. She was a hero.”

In 2019, Garcia was named a finalist for the Trinity Prize, which honors local teachers chosen as distinguished educators by Trinity University in San Antonio.

According to her teacher profile, she loved to barbecue with her husband of 24 years, Joe, and listen to music.

Xavier Lopez was an honor-roll student who was looking forward to spending his summer vacation days swimming, his cousin, Lisa Garza, told the Associated Press.

“He was just a loving 10-year-old little boy, just enjoying life, not knowing that this tragedy was going to happen today,” said Garza, per AP.

“He was very bubbly, loved to dance with his brothers, his mom. This has just taken a toll on all of us.”

A GoFundMe campaign by Xavier’s family has been set up in his honor.

Uziyah’s grandfather, Manny Renfro, told AP that his grandson was “the sweetest little boy that I’ve ever known” —  and he’s “not just saying that because he’s my grandkid.”

Renfro recalled Uziya’s last visit to his home before the tragedy, saying to AP, “We started throwing the football together and I was teaching him pass patterns. Such a fast little boy and he could catch a ball so good. There were certain plays that I would call that he would remember and he would do it exactly like we practiced.”

“My beautiful, smart, Alexandria Aniyah Rubio was recognized today for All-A honor roll,” Alexandria Rubio’s mother, Kimberly Mata-Rubio wrote in a Facebook post. “She also received the good citizen award. We told her we loved her and would pick her up after school. We had no idea this was goodbye.”

Alexandria’s cousin wrote on Twitter, “She was such a bright light in everyone’s life and was a badass ball player. You left this world way too soon, and you will forever be missed.”

Salazar added that Jose, who enjoyed playing baseball and video games, “was a very happy little boy” who “loved both his parents and loved to laugh and have fun.”

Jose’s father, Jose Flores Sr., told CNN that “He was always full of energy, ready to play till the night.”

“My precious angel you are loved so deeply,” Faith wrote. “In my eyes you are not a victim but a survivor. I love you always and past forever baby sister, may your wings soar higher then you could ever dream. Till we meet again Tess Marie, love your big sissy.”

A verified GoFundMe campaign has been established to support Tess’ family.

Another honor roll student, Amerie Jo Garza was a loving sister who was “protective” of her 3-year-old brother Zayne.

“She kissed her brother, went to school,” her grandmother, Berlinda Arreola, 49, told PEOPLE.

Minutes after the award ceremony at which she was celebrated for her honor roll achievement, Amerie was shot to death while trying to call 911.

“She was so protective,” Arreola says. “She always wanted to help.”

A verified GoFundMe account confirms the death of Jayce Luevanos.

“The Cardona family is asking for any and all help both monetarily, for funeral expenses, as well as prayers for their family,” the page states.

According to the BBC, Jayce’s aunt wrote on Facebook, “Still can’t believe that we’re never gonna see you again.”

Normally, Jailah enjoys school, but on the day of the tragedy, her mom says she “didn’t want to go.”

“She told her father, ‘Can I stay home?'” Luevanos told Univision. “I think she knew something would happen.”

Luevanos grieved her daughter in a heart-wrenching post on Facebook: “I’m so heart broken baby. We miss you so much mama R.I.P my beautiful angel fly high baby can’t wait to see u again.”

Jailah’s cousin Jayce was also killed in the shooting.

A verified GoFundMe page has been set up to support Jailah’s family.

A verified GoFundMe page has been set up to support Jailah’s family.

“My sweet baby cousin we loved u dearly I’m so sorry this happen to u baby please keep my family in your prayers,” wrote Miranda’s cousin Deanna Miller in a Facebook post.

According to The Dallas Morning News, Miranda’s family searched for her for hours before learning that she had passed away in the shooting.

“Now the two girls are “dancing up in the sky, watching over us,” Rodriguez’s sister, Lidia Anthony Luna, wrote on Facebook.

Jackie’s father, Jacinto Cazares, writes that his daughter was “full of life and love.”

“My baby girl has been taken away from my family and I,” Cazares whote in an online post. “We’re devastated in ways I hope no one ever goes through. … It hurts us to our souls.”

He added that he plans to see to it that her “passing not be in vain.”

The daughter of Stephen Garcia and Jennifer Lugo, Ellie Garcia was a devoted Christian and played basketball in the city’s youth league.

Shortly before noon on Tuesday, Jennifer posted on Facebook that she heard gunshots, and feared that the police activity she heard was on the way to her daughter’s school. Once she learned that there had been a shooting, she desperately asked friends to help her find Ellie.

“My heart is shattered to pieces,” she wrote. “I love you baby girl I will never stop thinking of you !!!”

Now, a video that Ellie had recorded is circulating the internet, in which Ellie says, “Jesus, he died for us, so when we die, we’ll be up there for him.”

“She loved to draw,” Rosemarie Ramirez said of her niece, opening her cell phone to show a drawing of sunflowers Alithia made for her. “It’s the last thing she gave me.”

After the tragedy, Rosemarie drove about 150 miles to drop off a bouquet of flowers at the school.

“I want the families to know that they’re not alone. We’re all grieving,” she said. “My whole family is devastated.”

A verified GoFundMe page has been established to support the Ramirez family.

“We are devastated and heartbroken. Rojer was a very intelligent, hard-working and helpful person,” his aunt Precious Perez told KSAT-TV. “He will be missed and never forgotten.”

“Thank you for the prayers and for trying to help find my cousin, it breaks my heart to say my Rojelio is now with the angels. I’ll forever miss you and love you my angel,” his cousin wrote on Twitter, per The Guardian.

Makenna loved tumbling, and had recently exchanged friendship bracelets with one of her pals, the friend’s mother told The Dallas Morning News.

“My baby sister has finally been found in a classroom… thank you for everyone sending their love to my family and I,” her big sister Kadence Elizabeth wrote on Twitter Tuesday. “All I ask is that you hug your loved ones tonight and tell them you love them, you never know when you won’t have the chance to anymore.”

“She had the biggest heart and loved her family and friends so much,” Makenna’s aunt wrote in a verified GoFundMe page set up for her family. “Her smile would light up a room. We will carry her in our hearts and we know she is with our Lord and Savior.”

“Unfortunately my beautiful Nevaeh was one of the many victims from todays tragedy,” wrote Nevaeh’s cousin on Twitter, per the Los Angeles Times.

“Thank you for the support and help. Rest in peace my sweet girl, you didn’t deserve this.”

Her aunt created a GoFundMe campaign to help cover costs from the tragedy.

The cousin of Maite’s father, Adrean Rodriguez, posted a GoFundMe campaign to help the grieving father who lost his “only baby girl and his princess.”

“We are all deeply saddened by the loss of this beautiful angel,” Andrean continued on the description of the page. “… He did everything possible to make her and his kids happy. Any donation is greatly appreciated and will all go to the family to help with any expenses needed to allow the family time to grieve without the burden of costs. Rest in paradise Our Sweet little Angel Maite Yuliana Rodriguez. We love you.”

On the day that she passed away, Eliahana “Elijah” Cruz Torres was looking forward to her final softball game of the season, which was scheduled for that evening.

“I talked to her last night,” her aunt told KENS-TV, “and she was kind of nervous, saying that it was her last game, and she didn’t want softball to end.”

Elijah was also anxiously waiting to hear if she made the all-star team.

“And she was also saying like, ‘What if I make it? I’m gonna be so nervous.’ And I was like, ‘Girl, you got this,'” her aunt told the station.

Layla loved rocking out to “Sweet Child O’ Mine” by Guns ‘N’ Roses with her dad on the car ride to school, and was known as the “princess” of her family, according to her parents’ Facebook profiles.

She was also a lightning-fast runner who won a total of six races at her school’s field day, AP reports.

“She was just a whole lot of fun,” her father, Vinnie Salazar, told the outlet.

On a GoFundMe campaign established to support Layla’s family, Vinnie wrote, “If people knew how much we truly miss our daughter, they would wonder how we’re still breathing … she will live within the beat of my heart forever.”