4 of the Most Common Behaviors That Can Predict Divorce 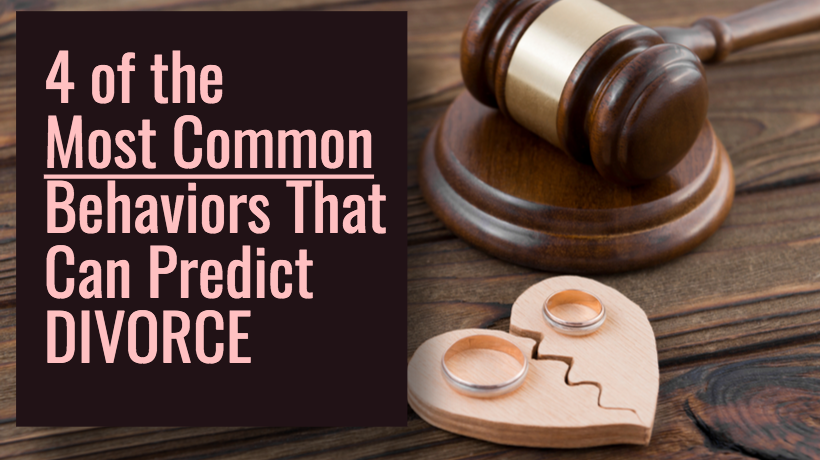 Divorce is something that no one wants to go through, but it could be necessary for some relationships to end. According to Legal Templates, people looking for divorces was 34 percent higher from March through June of 2020 due to quarantine. Divorce is something common in the U.S., so it is important to know different behaviors that can lead to a divorce or help you prevent it from happening.

Communication is important in any relationship, especially in a marriage. Lacking communication can lead to many problems that can only be resolved through a divorce. People can have different ways of expressing how they feel or think, it is you and your partner’s responsibility to learn how to talk with one another to keep the relationship strong. According to Angela Welch, LMFT, this will make your work, home, and sex life suffer if there is no communication. Problems that can arise from not communicating are money trouble, wrong assumptions, and searching for others to fill that void.

When communicating, sharing unnecessary criticism, or trying to pick a fight for small things can lead to a divorce. Expressing only negative feelings toward a partner will get tiresome and won’t make the relationship last. It can be important to share negative feelings to resolve the problem, but it cannot lead to a fight. “Starting a sentence with a criticism will undoubtedly create defensiveness in whomever you are speaking to. Likewise, leading with a request will have most people wanting to meet your need,” says Susan Pease Gadoua, LCSW.

You Both Are Less Affectionate

Being less affectionate can be a behavior that leads to divorce. Affection is important in an intimate relationship. According to Sam Margulles, Ph.D., emotional engagement is generally accompanied by the withdrawal of affection. It can be a small but important sign that you both are falling out of love with one another. Which can bring up other problems in the relationship as well.

Mutual respect is also an important foundation in a healthy relationship. Once that respect has disappeared, there is less empathy between one another which can cause anger, resentment, and fear. When there is no respect between partners, problems in the relationship can become even greater. “Lack of respect is the biggest sign of a troubled marriage leading to divorce. It’s very common to hear partners who are heading toward divorce say, ‘I’m tired of this, of always fighting with you.’ They are usually more impatient than in the past and anger more easily,” says Rosalind Sedacca, CDC.