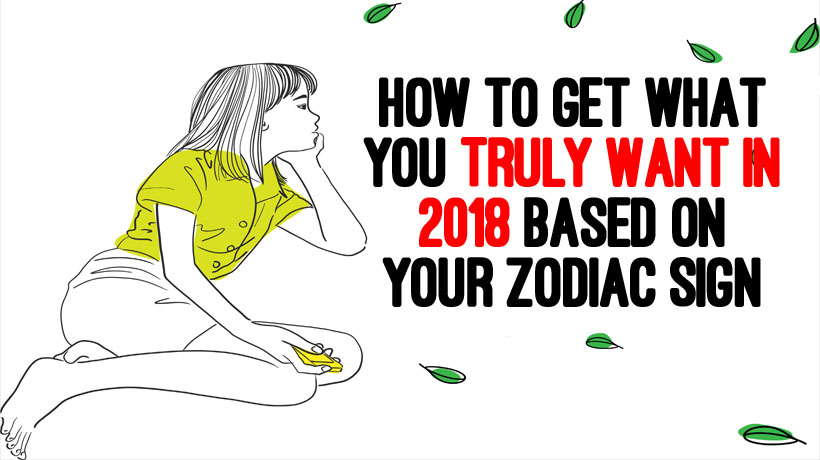 You may know what you’re extremely hopeful for this year, but turning those dreams into reality is another story. Although we can’t exactly predict the future, heed these suggestions to see how you can better manifest your 2018 goals.

Aquarius (January 20th-February 18th)
Speaking your truth is necessary, no matter how hard that can seem. Let go of critical and controlling people who may want to dictate your life – honor your own path to happiness.

Pisces (February 19th-March 20th)
They say it takes 21 days to change old ways or develop a new habit. Instead of cutting the cord with your bad habit cold turkey, add a healthier substitute to your routine and stick with it for at least a month. You’ll be able to wean yourself off more effectively that way.

Aries (March 21st-April 19th)
Your lifestyle is usually go-go-go, and this year is no different. There are so many things you want to accomplish that self-care has already taken a mental back seat. Try to block out one night of every week this year to do something that will nourish your soul – even if it’s as simple as watching a movie by yourself without distractions.

Taurus (April 20th-May 20th)
Connections are key in terms of what you’re looking to bring in this year, Taurus. Grab a trusted friend and start networking around (your community, associations or work functions). You never know who you’ll meet!

Gemini (May 21st-June 20th)
2018 is your year, and you’re banking on some big moves to happen. Talk to those who are experts in their field to hear their success stories. They may be able to point you in the right direction – or if anything, inspire you to keep the momentum going.

Cancer (June 21st-July 22nd)
You’ll be crawling out of your shell (comfort zone) a lot more this year, Cancer, and it’s a refreshing change of pace. If you’re not sure how to channel your sudden creative energy, take up an interesting class on a subject you’ve been meaning to learn more about.

Leo (July 23rd-August 22nd)
Saying ‘no’ to the things and people that are no longer serving you? Easier said than done. Practice your ‘no’s’ with smaller things and work your way up to the bigger, more necessary things. You’ll slowly build your confidence and change will become easier.

Virgo (August 23rd-September 22nd)
You may already be seeing the benefits of focusing more on your friendships rather than fully throwing yourself into your work this year.  Avoid feeling guilty about letting loose – making memories with the people you care about is something you shouldn’t take for granted.

Libra (September 23rd-October 22nd)
Don’t ignore your pull for something more stable this year, Libra. We all need a sense of security no matter how nice it is to go with the flow. Get clear about what you really want and start making calculated moves – the time is now.

Scorpio (October 23rd-November 21st)
You’ve let go of the negativity that was draining you last year, so this year is one where you can truly focus on your happiness. Think about something you’ve always wanted to do – if it’s realistic this year, it might be worth the investment.

Sagittarius (November 22nd-December 21st)
Surrendering things to the universe can seem unsettling at first, but there’s only so much you can control. Realize you’re only human and forgo the thought that you need to do everything yourself in order to get what you want. Help is around the corner – all you have to do is ask.

Capricorn (December 22nd-January 19th)
Write down your goals for the year and form a support squad where you all can hold each other accountable – this will allow you to really see them through until the end.