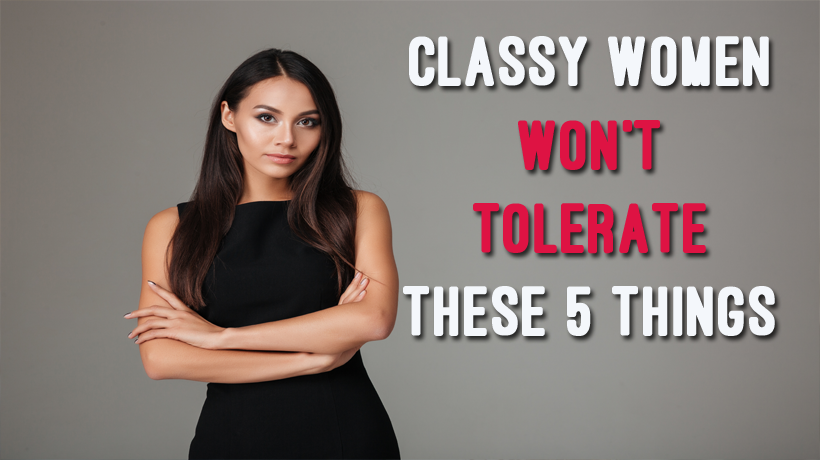 While a classy woman may be elegant and handle things with grace, that doesn’t mean she won’t put her foot down if she needs to. In fact, she’s the one who can be assertive and direct in her approach without sacrificing her compassionate and lovable nature. How does she do it? Well for one, she won’t put up with the following things.

(Negative) drama
A classy woman won’t surround herself with people or situations that drag her down. She stays far away from the “he said, she said” nonsense and won’t partake in talking about other people’s flaws. And though she’ll understand that some people have their bad days here and there, it’s another thing if they’re unloading their misery onto her in every conversation; she’s not a dump truck.

“Bull” and lies
She has a keen eye for sensing people that have hidden agendas; classy women know how to trust their gut. If you’re telling her everything she wants to hear, but your handshake doesn’t match your smile, it’s time to take your games elsewhere. Sooner or later, she’ll see your true colors and make you regret that you ever played her for a fool.

Compromising her values
She might be starting her own business or trying to break through a certain industry. If she’s classy, she won’t entertain those who are looking to take advantage of her for their personal gain – even if they offer to compensate her generously. She has her mission in mind and her dignity that she’ll protect, even if it means she’ll have to fight through her battles the hard way.

Bigotry/disrespect
A classy woman knows that no one is beneath anyone else. If you’re wondering how she deals with people who are condescending, the answer is simple – she doesn’t. In her mind, she has already removed them (and will remove them from her life if she hasn’t yet). She knows that their hurtful words say everything about their character, not hers. She also won’t stand for it if they use negative words to put down the people around her.

Feeling underestimated
She’s worked hard to achieve everything she has today. And for someone to think she isn’t capable of doing the job, or that she can’t do it well enough, is a slap in the face. The classy woman doesn’t have the time nor the need to prove herself to anyone. So she’ll tell you exactly how she feels—without losing her cool or making a fuss about why you can’t see her talent—and will move on to deal with those who recognize her worth.

Some of the material in this article is the opinion of the writer.